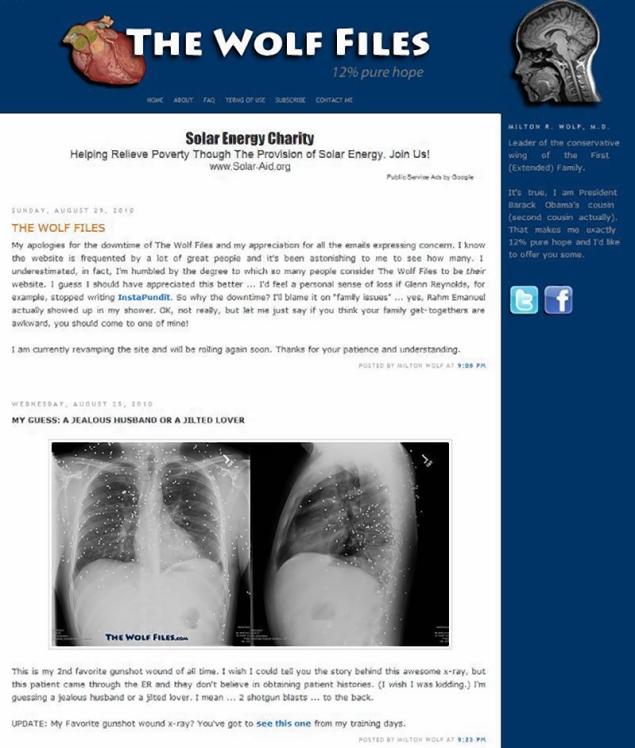 Dr. Milton Wolf is the Tea Party-backed GOP candidate seeking to unseat sitting Kansas GOP Senator Pat Roberts, an establishment republican. Wolf is a distant cousin of President Barrack Obama which ties he has made known in a bid to increase his popularity.

In fact, he created ads which make it clear he is the president's cousin, but cannot support Obamacare even through blood ties because the Hippocratic Oath takes priority.

Ironically, the same Hippocratic oath barring him from doing anyone harm did not stop him from posting X-rays of gunshot victims on his Facebook page along with insensitive remarks.

In one instance, he added what he must have considered pithy remark to the X-ray of a decapitation victim saying that it resembled an alien wound from a "Terminator" flick.

In another X-ray of a female gunshot victim, he opined that the wounds likely came from a jealous husband who dropped her with two rounds to the back. Other comments of his made it clear he kept a personal list of his favorite gunshot wound X-rays. He now claims the photographs were uploaded for purely educational uses and that their coming to light is part of a smear tactic against him.

Lawyer Tried To Warn Prison Prior to Shooting Rampage