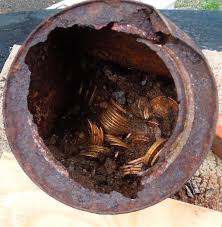 Couple Find $10m Coins[/caption]Eureka! California Couple Finds $10M in Gold Coins Buried in their Yard
"Gold Country", Northern California - A local couple was walking their dog in the backyard of their home when they discovered a muddy and rusty open container peering out from the ground. Upon inspecting it, they found it contained well preserved gold coins dating back to the 1800s. Naturally, they dug further and uncovered seven additional coin containers. In all, they found a cache of 1,400 gold coins in $5, $10, and $20 denominations.

The next step the couple took was to have the coins graded by a numismatic expert. It turns out the world's largest such operation is located down state in Orange County. The coins are said to be in near mint condition with a total street value of $10 million. In short, the couple are now millionaires. The couple has kept their names anonymous because they don't want anyone exploring their property for additional caches of coins. Some of the coins dated back to the 1847 during the California gold rush. They were minted in San Francisco and represent an important history of this nation during a time when goods and services were paid for in either silver or gold.

The find marks the largest discover of buried gold eclipsing the previous record set in 1985 by a full order of magnitude. At that time, a construction crew in Jackson, Tennessee discovered a stash of buried coins with a collective face value of $4,500. When sold at auction, they fetched a cool $1 million. As for the Northern California couple, they are ecstatic over their sudden wealth. One of the coins alone is said to be valued at $28,000. They will put some of the coins on display at an upcoming coin show in Atlanta, but will sell on Amazon. They have stored the coins in a safe facility for the time being.