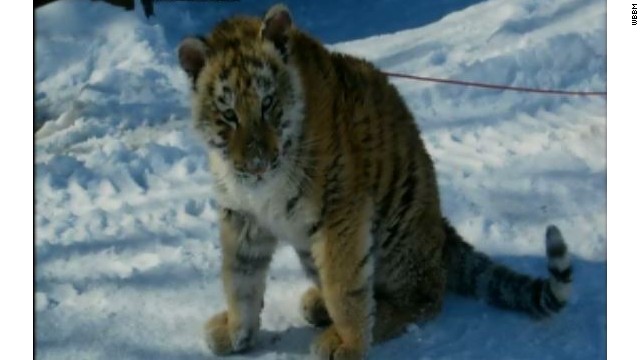 A Chicago-area man faces charges after allegedly bringing a tiger cub into a bar.
[/caption]Man Arrested for Taking Leashed Tiger into Illinois Bar

An Illinois ranch owner has been charged with possession of a dangerous animal as well as reckless conduct for walking his leashed tiger into a bar in Joliet, Illinois. State law prohibits bringing dangerous animals inside bars. Lockport resident John Basile, who owns the nearby Big Run Wolf Ranch, thought nothing of attaching a leash to the tiger that newly resides on his property and entering the bar to quench his thirst. A complaint was officially filed in Will County court, contending that the 56-year old Basile's actions compromised the safety of a female customer already in the bar because his animal was restrained only with a leash and wore no muzzle.

Although Basile has made no public comment about the uproar he caused by strolling into Uncle Ritchie's Bar located on Ninth Street in Joliet, the website for his Big Run Wolf Ranch indicates that he recently acquired a Siberian Tiger by the name of Shere Khan. Basile's ranch is licensed by the federal government to serve as a not for profit educational facility and houses a variety of North American wildlife, including wolves, three coyotes, a cougar, a black bear, a porcupine, a horse and a woodchuck.

Illinois man tiger walk: A Man Walks into a Bar With a Tiger
http://lakeforest.patch.com/groups/trending-in-america/p/trending-a-man-walks-into-a-bar-with-a-tiger-