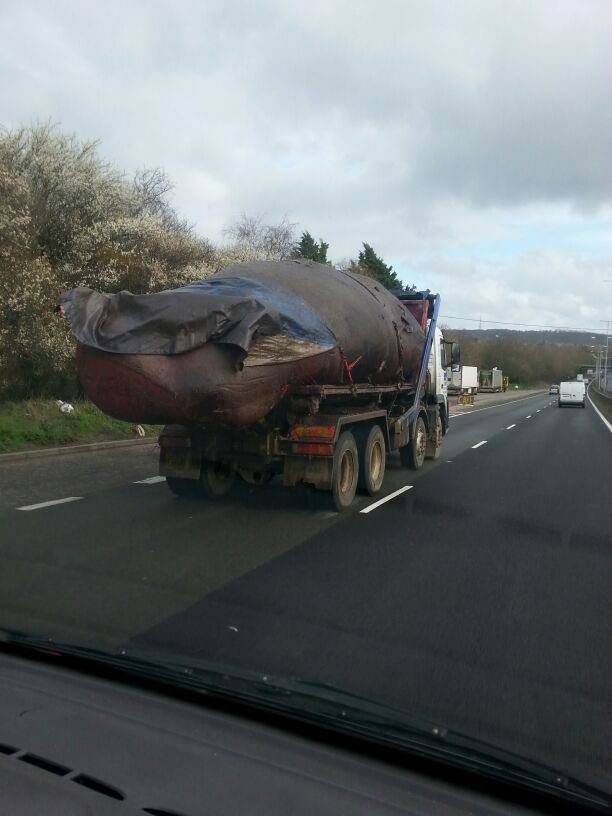 Surreal: Commuters spotted this enormous sperm whale carcass on the A2 in Kent
Read more: http://www.dailymail.co.uk/news/article-2569402/Now-thats-sea-monster-truck-Motorists-stunned-50ft-sperm-whale-lorry-travelling-A2.html#ixzz2ulBDYOwu
Follow us: @MailOnline on Twitter | DailyMail on Facebook[/caption]Drivers Repelled By Corpse of 50 ft. Sperm Whale on Expressway
A huge sperm whale being transported along the Kent Motorway in the middle of the day was reported to be rotting, giving off a repulsive odor and sickening drivers all around. According to one witness, the massive mammal had no head or tail, was secured to the bed of a large truck, and was losing innards all over the road.

Reports state that the body had been on a local beach decomposing for a number of days. It was in process of being transported to a nearby landfill. Drivers claimed the smell to be so bad it was even compared to an abattoir, or slaughterhouse, only much worse. Most voiced wonderment as to why the sperm whale was not transported at night when there would be less drivers make ill from the rotting stench. This is definitely not something you experience everyday, say drivers.

According to resources, the 50 ft. mammal is assumed to have gotten beached on the coast of north Kent near Seasalter. It is estimated that the whale lay their for approximately one week decomposing before anything was done. The overwhelming smell had permeated the beach area entirely prior to moving the whale.

Now that's a (sea) monster truck! Motorists stunned to see 50ft sperm whale on back of lorry travelling on the A2
http://www.dailymail.co.uk/news/article-2569402/Now-thats-sea-monster-truck-Motorists-stunned-50ft-sperm-whale-lorry-travelling-A2.html#ixzz2ulBOVMSE

Related Topics:whale on lorry
Up Next

Tumor Had Teeth: Tumor in Boys Brain Had Teeth (PHOTO)