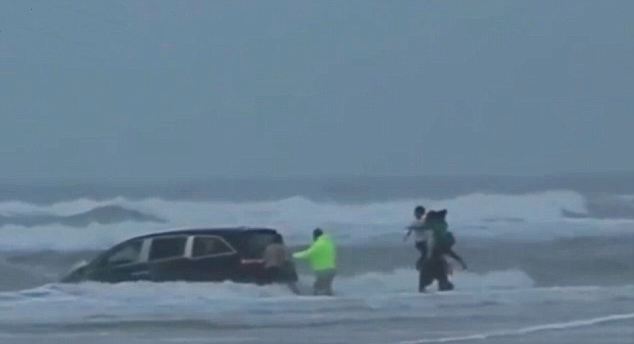 Rescuers on hand rushed to the car and heard two children seated in the back with outstretched arms crying out for help because their mother was trying to kill them. No sooner did rescuers remove them from the car than the two children, a 9-year-old girl and a 10-year-old boy, began insisting that there was one more child in the car which they referred to as "the baby".

They were adamant the baby was in the car, but the mother sat stone faced and expressionless. She didn't utter a single word.

Finally, rescuers were able find the third child, a 3-year-old girl and remove her safely from the car which was partially submerged by the tide. Ultimately the 31-year-old mother, a woman from South Carolina, got out of the car and walked back to shore. Police have not ruled that the case is an attempted murder-suicide, but it appears that it most certainly was.

Race against time: The rescuers managed to grab all the children from the car as it was submerged in the surf[/caption] Tim Tesseneer, of Rutherfordton, North Carolina told WESH 2 he was one of the first rescuers to reach the children after the mother made a sharp turn off the road and drove into the ocean.

He said: 'The two in the back seat were crying, with their arms out saying "Our mommy's trying to kill us, please help".'

Video of the rescue shows a lifeguard carrying two children away from the sinking van when the children tell them there was another child inside.

The kids are like, "No there's a baby. There's a baby",' said Tim Tesseneer, of Rutherfordton, North Carolina. 'She (the mother) wouldn't say a word. She didn't tell us nothing about a baby.

'She had this look on her face, I can't describe it. It was just an awful blank look, like spaced out look.'

Another video taken by Simon Besner, tourist from Canada, the woman can be seen outside the van as lifeguards try to pull her children from the vehicle.

Witnesses described her hopping out of the car window as her screaming children remained seat-belted in the back. Waves nearly pushed her under the van.

'It was a bit terrifying,' said Besner.

Oddly enough, concerned family had phoned police earlier in the day because the woman was behaving strangely. Police arrived to question her but let her go. Four hours later she attempted to kill herself, her three children, and unborn child.

Related Topics:Pregnant Mom Van
Up Next

Oldest Woman 116: Misao Okawa Adds Another To Her Record

Who Needs Paper: High-Tech Crapper Does The Washing And The Drying