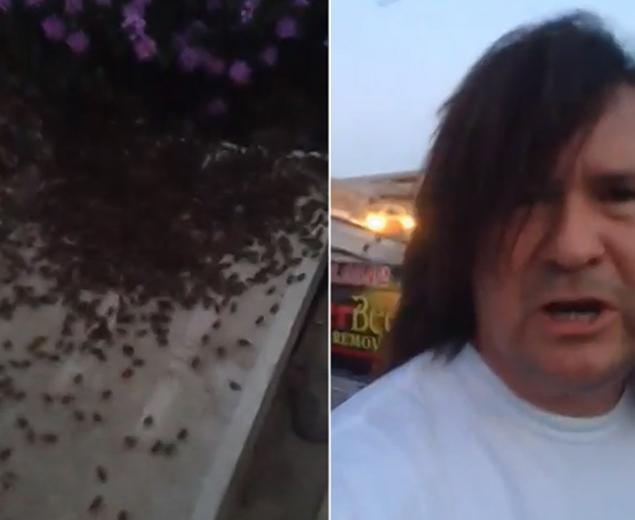 BANNING-BEAUMONT PATCH Lance Davis (pictured) cleared the swarm of about 75,000 bees - which were living in a buried Verizon cable box - after they attacked an elderly woman and five firefighters on Thursday. [/caption]Most people have been stung by a bee or a wasp at least once in their life, and other than hurting a little, it usually isn't anything too serious. However there are some kinds of honey bees out there, known as Africanized or "killer bees", which are known for being more defensive and aggressive in their behavior whenever they sense human or other animal presence in the area. It was these bees who recently swarmed and attacked a 71-year-old woman in the Palm Desert area of California.

According to the New York Daily News, a local beekeeper who had been called to help remove the bee hives in the area, said the woman had gotten into her car, which was within 90 yards of their hive when she was attacked and stung an estimated 1000 times. They had apparently been nesting in a Verizon cable box located near the house. Africanized honey bees, known colloquially as "killer bees", are some hybrid varieties of the Western honey bee species, (Apis mellifera), produced originally by cross-breeding of the African honey bee A. m. scutellata, with various European honey bees such as the Italian bee A. m. ligustica and the Iberian bee A. m. iberiensis. The hybrid bees are far more defensive than any of the various European subspecies. Small swarms of Africanized bees are capable of taking over European honey bee hives by invading the hive and establishing their own queen after killing the European queen bee.[/caption]

Firefighters had been dispatched to help the victim and five of them were stung while trying to rescue the woman. Local police alerted neighbors and other nearby residents to stay inside and use extreme caution if they noticed any bees in the area.

Locals have also been warned about other factors such as wearing shiny jewelry, perfumes, loud noises being made near a nest, and killing an Africanized bee. These kinds of bees are very sensitive to noise and movement near their nest and can be easily provoked. Notifying authorities if you've seen a large nest of bees is important so that the nest can be removed and not endanger others.

Attack of the Killer Bees - [A National Geographic Documentary]