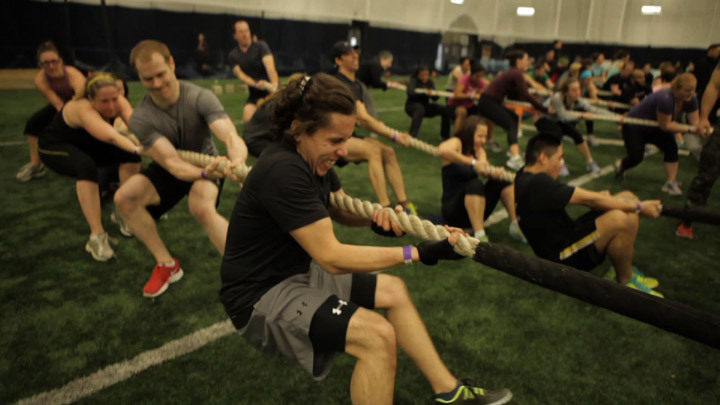 Exercises work up a sweat during a military-style fitness class.
Photo courtesy 16x9[/caption]

CrossFit came under the crosshairs of the transgender community when a 34-year-old personal trainer filed a $2.5 million lawsuit this week claiming she was prohibited from competing in the company's annual strength contest. A trial date hasn't been set.

Chloe Johnson said CrossFit wouldn't let her enter its strength competition as a woman. She was born a male, but had a sex change operation in 2006. California legally classifies her as a woman. However, CrossFit said it was unfair to other contestants to allow her to compete as a female. Johnson said she was discriminated against. She also sued for unfair competition and intentional infliction of emotional pain.

Johnson, who is 5-feet, 4-inches tall and weighs 150 pounds, said the company was trampling her civil rights. CrossFit officials said they had no problem with transgender athletes, but wanted a level paying field.

CrossFit’s general counsel, Dale Saran, would not comment on the lawsuit, which seeks $2.5 million in damages. Saran directed The Associated Press to a CrossFit online discussion board, where he posted that Jonsson had never supplied medical documents to back up her assertion that she was a woman. He also dismissed McCoy’s suggestion that transgender athletes are engaged in a struggle as valid as the one black baseball players waged to be accepted in the major leagues.

“The fundamental, ineluctable fact is that a male competitor who has a sex reassignment procedure still has a genetic makeup that confers a physical and physiological advantage over women,” Saran wrote in a letter to McCoy that’s linked to the discussion board. “That Chloie may have felt herself emotionally, and very conscientiously, to be a woman in her heart, and that she ultimately underwent the legal and other surgical procedures to carry that out, cannot change that reality.”

Transgender athletes continue to have problems competing in their new gender categories because athletic sanctioning groups have put policies in place limiting their participation. The International Olympic Committee mandates a significant period of time between sex-change hormone treatments and sex reassignment surgery creating transgender identities and when transgender athletes can compete in the gender categories they have chosen.
Related Topics:
Up Next