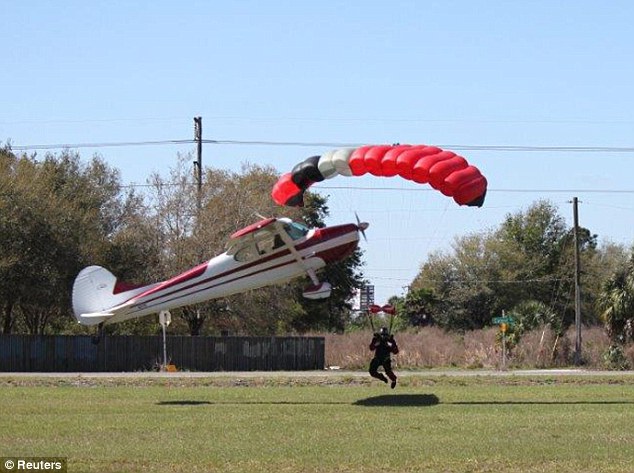 This photo released by the Polk County Sheriff's Office shows a plane nose-diving into the ground after getting tangled with a parachutist, left, Saturday March 8, 2014, at the South Lakeland Airport in Mulberry, Fla. Both the pilot and jumper hospitalized with minor injuries.
Photograph by: Tim Telford , AP Photo/Polk County Sheriff's Office
[/caption]Tangled Pilot, Skydiver Blame The Other For Mid-Air Collision

Onlookers in Tampa, Florida, were horrified to see a mid-air collision over the weekend involving the pilot of a small plane and a skydiver.

The plane came close enough to the skydiver to clip the lines of his parachute, causing both skydiver and plane to tumble toward the earth. Luckily, both parachutist and pilot survived the collision and crash, suffering only minor injuries. But now each of the men is pointing the finger of blame at the other.

Steve Frost, the 49-year old skydiver, reports that the pilot of the plane from which he made his jump ensured that he contacted the other pilot so that he was aware that Frost would be parachuting in the vicinity.

In an interview on GMA, Frost described the startling moment he realized he was about to be hit by an airplane. The collision happened Saturday, just as Frost was landing from a skydive and Trembley was touching down on the runway [/caption]

'All of a sudden, I look over to my right and there was an aircraft coming at me. I realized that I was going to have an impact and I scrunched up and prepared for being hit,' Frost recalled.

Frost admits he was also surprised that he survived the collision and fall. But 87-year old pilot Sharon Trembley complained to the news media that although he was aware that jumpers were in the area, it was the parachutists who were in the wrong place and helped to cause the collision.

“All the sudden I looked over to my right and there was an aircraft coming at me, I realized I was going to have an impact. I scrunched up and tried to prepare myself,” Frost said.

“My first thought is that I don’t want to end up in the propeller,” he added.

Ironically, the near-tragedy occurred on a date designated as National Parachuting Safety Day. Officials from the Federal Aviation Administration are investigating the incident, helped by photos taken by a local photographer.

Both the NTSB and FAA are investigating the crash. Dragged: The skydiver is pulled back by the plane after his parachute gets caught on its wing [/caption]

On The Web:
Mid-air collision between Florida plane and skydiver leads to crash
http://www.today.com/news/skydiver-plane-crash-will-jump-again-2D79347939

Related Topics:Skydiver plane collision
Up Next