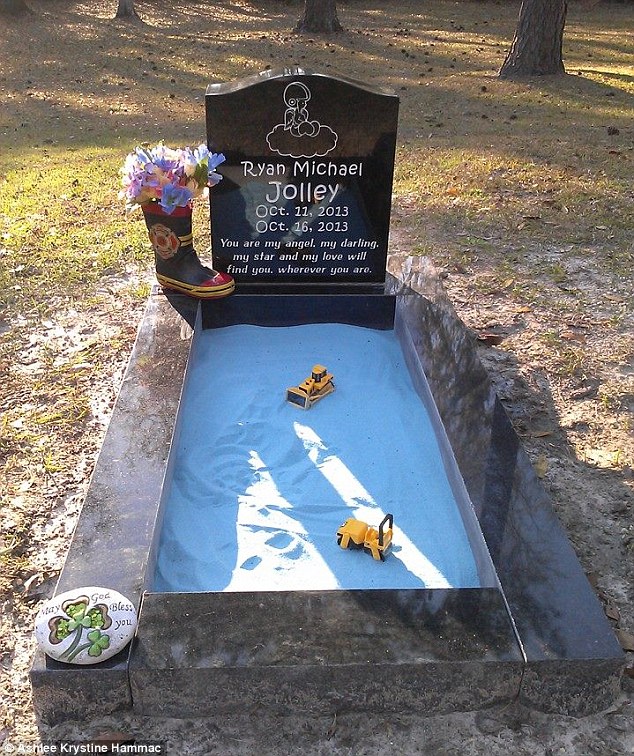 Initially, Hammac, 24, planned to place glass pebbles on baby Ryan's tombstone, but ultimately she decided to create something that her son could relate to as well [/caption]mom sandbox son grave: Mom Honors Dead Son With Sandbox Grave

When Ashlee Hammac's newborn son Ryan died last fall, his 3-year old brother Tucker lost his only sibling. Ryan was only five days old when he died due to a brain disorder causing insufficient bloodflow to reach his brain. That's when the grief-stricken mother decided to refashion Ryan Hammac's gravesite with the addition of a sandbox on top so that Tucker could visit often and continue to play with his brother.

Tucker now calls his brother's gravesite, "baby Ryan's sandbox" and asks to visit it often accompanied by his mother. Tucker enjoys playing with his trucks in the specially constructed gravesite sandbox. Hallowed playground: Tucker, age 3, loves playing with trucks and often asks his mother to take him to his brother's sandbox at the cemetery [/caption]

Hammac posted a photo of Tucker playing at Ryan's sandbox online and reports she received an unexpected outpouring of love and support from many other mothers who are grieving the loss of a child. Support from complete strangers has been so strong, in fact, that Hammac and her family have now established a new non-profit organization called Pages to Memories, in order to help provide emotional support to families in similar situations in addition to providing much needed equipment and supplies to hospital neo-natal departments. She says the organization and the sandbox are helping with her grief. Too young: Ryan Michael Jolley was born October 11, 2013, prematurely and died only five days later after being deprived of oxygen for several hours [/caption]

Mother creates heartbreaking sand box tribute on her infant son's grave so his toddler brother can spend time with him
http://www.dailymail.co.uk/news/article-2580696/Mother-creates-heartbreaking-SANDBOX-tribute-infant-sons-grave-toddler-brother-spend-time-him.html