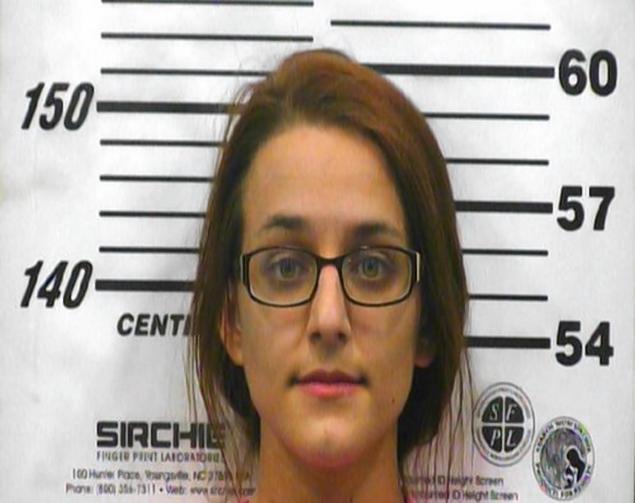 WCAU Stephanie Faye Hamman, 23, of Church Hill, Tenn. said she smokes marijuana all day and all night. She also claimed she’d been baptized Sunday before driving her car into a church and stabbing her husband. [/caption]Devil Drives Woman in Smash & Stab Incident

Hawkins County, Tennessee - It may be that 23-year-old Stephanie Peery Hamman is struggling with the ordinary life she now leads.

As a high school cheerleader, she was once the center of attention of jocks and girls alike.

Perhaps she was even a "mean girl" herself. Either way, she has now been arrested in a smash and stab incident. However, it may be a case of mistaken identity by the police because according to Mrs. Hamman, the real culprit is the devil, the Biblical father of all lies.

As per the former cheerleader gone mental, she needed to return some items at her place of worship called Providence Church. However, no one was there and the doors were locked. It was then that God first got involved and told her it was his desire she be inside. So she drove her car through the door to enter the sanctuary. Next, she phoned her husband who was at their residence across the road from the Church.

She informed him of the car accident and he promptly arrived to find her sprawled out before the altar. However, this time it wasn't God egging her on but the devil. As her husband approached her, she thrust a kitchen knife into his chest and then pulled it out.

She returned home to call 911. She claims the devil urged her to stab her husband for worshipping NASCAR. One would think the devil would be fine with any kind of worship that draws souls away from God. Obviously, Mrs. Hammam disagrees.
[caption id="attachment_81749" align="aligncenter" width="635"] WCTI The church sustained severe damage after the crash, but no one was there at the time, Pastor Joel Trigg said. [/caption]