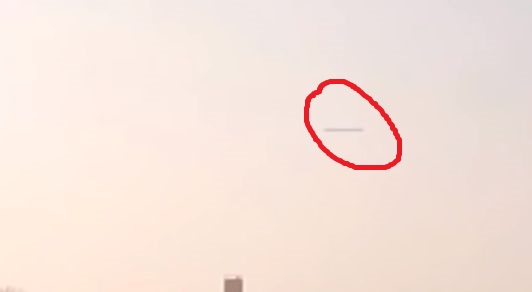 
A video has surfaced on YouTube of an alleged UFO soaring through the skies over Korosten, a city in The Ukraine. The large, cigar-shaped craft was supposedly filmed on March 6th above the city, which is located not far from Chernobyl, where a nuclear power plant suffered a massive meltdown in 1986.

The authenticity of the 1:10 video is being debated, as the YouTube channel it was uploaded to, 07TV, has a history of showing questionable videos, not only of other alleged UFO and extraterrestrial incidents, but of flying dragons and enormous dogs. The Ukrainian UFO video has also been viewed by former FBI agent Ben Hansen, the lead investigator on the Syfy series "Fact or Faked: Paranormal Files." While he says he saw no obvious mistakes in the animation or tracking, "the worse thing working against the authenticity of the video is that it has virtually no pedigree." Hansen points to the fact there are no actual witnesses to this UFO sighting who have come forward.

Another theory put forth online about the Ukrainian UFO came from Turner Radio Network. They have claimed the object is a secret U.S. Air Force gravity propelled aircraft called the Sky Dreadnaught.

The United States has deployed a spectacular new military asset in the skies over the Ukraine. The craft made its presence known on March 6, in broad daylight, and it so baffled media and local residents, they called it a "UFO." Since the craft has now been publicly seen, TRN is pleased to be able to report the development and deployment of the new "Sky Dreadnought."

The Sky Dreadnought is the most advanced military weapons system in the history of human existence. Nothing on the face of the Earth can even come close to comparing. The ship, a long, cigar-shaped craft, is almost 3,000 feet long, about the length of three aircraft carriers.

It flies by virtue of a gravity-manipulation system, allowing it to operate at any altitude -- even into space -- and return, without need of jet engines, propellers, massive fuel tanks or rocket engines. All this is achieved by the manipulation of Earth's gravity, which, for all intents and purposes, affords unlimited motion possibilities.

Ukraine has received much news coverage over the past few weeks due to its conflict with Russia over the Crimea region.