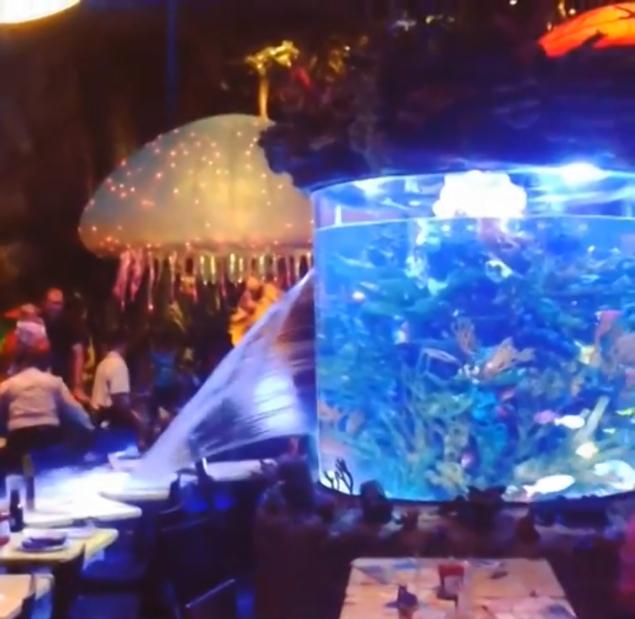 Orlando, Florida - Just outside the high-priced Disney World theme parks and parking lots is found Downtown Disney, a location which bears no costs for parking or visits. Patrons to this location may stroll the shops and eclectic restaurants. One such place is the T-Rex Cafe complete with a large round fish tank in the center.

During the dinner hours, a leak suddenly sprung on the outside of the tank causing a jet of water to shoot out at 45 degree angle from the top of the tank. The stream of water became a rush of water as water began to pour out of the side of tank releasing some of the fish and frightening guests.

Restaurant staff quickly sprang into action to both tend to needs of their guests and recover the fish. According to the T-Rex Cafe Senior VP Keith Beitler, workers at the venue did a marvelous job of ensuring the safety of the guests and the fish. No one was injured and all the fish were safely recovered.

A Disney spokeswoman called the leak small, saying that some fish were removed as a precaution and some tables in the restaurant had to be relocated. There were no were reported injuries from the incident. A person at the restaurant was told that the workers were able to save “all of the fish.”

The root cause of the incident was a faulty seal that gave way. For the time being, the fish have all been relocated to a holding tank while the main aquarium is repaired. Related Topics:Disney guests flee as aquarium bursts
Up Next