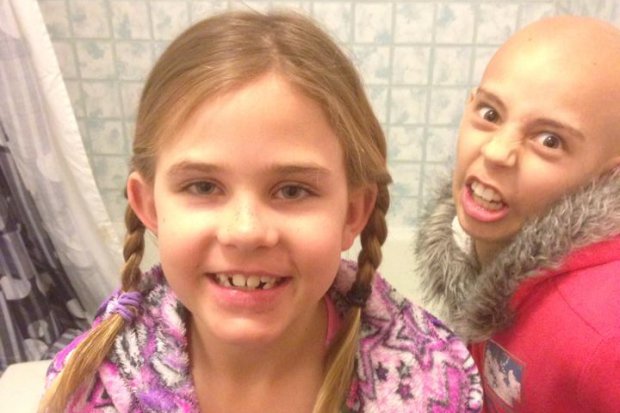 Students Kamryn Renfro and Delaney Clements are best friends. So when Clements lost her hair due to chemotherapy treatments for cancer, Renfro didn't hesitate to show her friend a true sign of support by shaving her head to match the bald head of her best friend.

Renfro had the full knowledge and support of her parents in making the radical hairstyle change to support her sick buddy.

But school officials at Caprock Academy in Colorado, however, contended that Renfro's actions were in violation of the school's dress code. They said there could be no exceptions. They promptly suspended Renfro from attending any of her classes. They explained to her shocked parents and others in the community that the dress code was there for a reason, to promote a safe and uniform environment for all of its students. And even when a student got cancer, the dress code didn't allow for shaved heads because it created the possibility of distracting other students. Delaney responded by saying that her best friend's selfless actions made her feel less alone and pretty special.

Now after receiving backlash via social media when the story went national, school officials have called for an emergency meeting of their directors to reverse their suspension decision. They have since reinstated Renfro. Many individuals commented about the situation on such social media sites as Reddit called the school's original decision to throw Renfro out of class both stupid and shortsighted, the kind of zero policy tolerance that really doesn't benefit anybody.

om Tossed in Hoosegow for Drinking While Breastfeeding – Remains Defiant