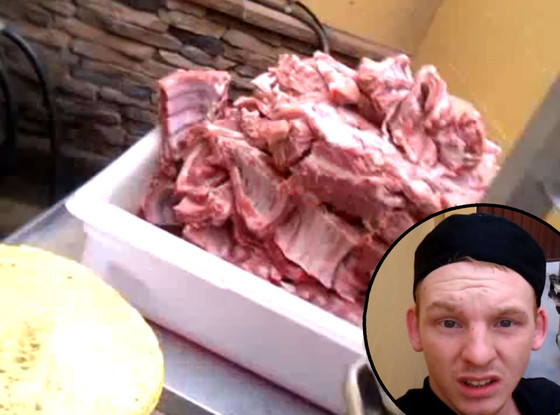 The Golden Corral chain of restaurants is experiencing a serious public relations problem this week thanks to a video uploaded by one of its employees in Port Orange, Florida showing a tray of raw meat sitting right next to the refuse dumpster.

The employee contended that the sickening display of raw food would soon be brought back into the restaurant for serving to Golden Corral customers. The manager at the location where the video was secretly shot and posted has reported that the individual involved in poor food sanitation techniques has been terminated from the restaurant.

The employee who orchestrated the video said that the tray of raw foods, including ribs, chicken, bacon and gravy which was dumped next to outside garbage containers, was hidden there by restaurant management during a surprise health inspection. Flies appear to crawl around the raw meats loaded onto the tray. If it's true that restaurant management intended to serve any of the meats stored outdoors, they could be subjecting their customers to severe health consequences.

If stored at temperatures of less than 40 degrees for more than two hours, food products, especially raw meats, can quickly become breeding grounds for bacteria that can cause illness.

A Port Orange, Florida Golden Corral restaurant has fired its manager over a case of improper food storage. The move came after a shocking video showing trays of raw meat being stored next to a dumpster was uploaded to the Internet by an employee.

"We're currently undergoing an inspection," Huber explains in the video. "Apparently, what my company likes to do to get ready for inspections is put their food by the dumpsters...To me, this is disgusting. I've been working here for a long time. And I don't think this is right."

Aside from the meat, the video, shot by Brandon Huber, also shows uncooked chicken, pot roast, ribs and bacon, as well as a large container of gravy and a green bean casserole being stored by the dumpster. There appears to be flies near the food, and Huber stated the food was "hidden" during an inspection process.

Huber has been compared to Edward Snowden (the NSA whistleblower) on Reddit, but he apparently had a different hero in mind: Dr. Phil. "last weekend i took the Dr Phil's weekend challenge to turn a problem in to an opportunity," the YouTube description for the video reads. (He also says that he sent the video to Dr. Phil, but apparently did not receive a response back, writing, "???????? it was his challenge!.....")

The owner of the Golden Corral, Eric Holm, terminated the manager for not following proper food storage procedures. Holm also emphasized none of the food seen on the video was served to any of the restaurant's customers, and it is safe to eat there.

Golden Corral has taken to Facebook to respond to the viral video (especially after their Yelp page was flooded with one-star reviews): "In regard to the video that is currently being circulated by an employee of Golden Corral of an isolated incident of improper food handling at our Port Orange, Florida location please note:

Raw meat that is left out in temperatures exceeding 40 Fahrenheit for more than two hours is subject to the growth of bacteria that may cause people to become sick. Each additional 20 minute period can double the amount of bacteria present.

There have been no further incidents of improper food storage reported at the restaurant.

The most well-known example of poor food handling practices is Diane Sawyer’s 1992 ABC News segment on the supermarket Food Lion, in which cameras caught employees selling meat and fish beyond their expiration dates and even coating them in Clorox to cover up the bad smell. And in the past five years, prankster employees at fast-food chains have grossed out customers by…