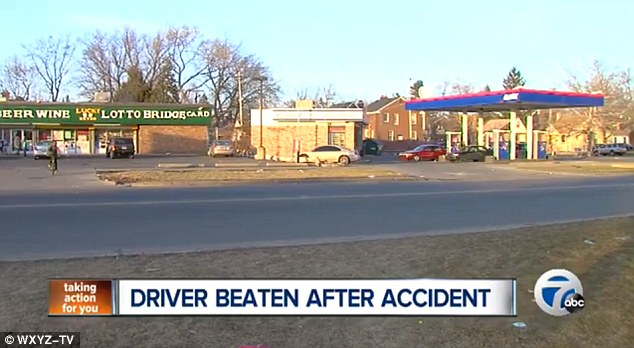 Brutal beatdown: The unidentified driver was savagely beaten after stopping to check on the young boy he accidentally hit with while driving this pickup truck[/caption]Bystanders near a barbershop on the east side of Detroit took the law into their own hands when the driver of a pick-up truck struck a 10-year old boy who had just stepped off of the curb to start to walk across the street said Detroit police Sgt. Michael Woody.

“A preliminary investigation shows the kid stepped off the curb in front of him,” Woody said. “No way he could have stopped in time.”

Driver Steve Utash received a beating from a group assembled near the accident, despite the fact that he immediately stopped his vehicle to get out to check on the condition of the youngster, 10-year old David Harris.

The men not only injured Utash, they also managed to rob him before fleeing when police arrived on the scene.

Harris sustained injuries to his lips, knees and feet. Doctors say he is expected to recover. Driver Utash fared much worse because the beating he received from the crowd rendered him unconscious. He is currently hospitalized and his condition has been listed as critical, with no comment yet from doctors on his chances for a full recovery.

A police representative reports that the situation remains dire for Utash, who tried to fend off his attackers unsuccessfully.

No arrests were made in the beating, but Woody said the boy’s father was taken into custody Thursday on an unrelated warrant.

“At this time, he is not a suspect” in the attack, Woody said. Where it happened: The boy ran out into the street at this spot, police said [/caption]

Police interrogated eyewitnesses at the scene, who told investigators that they believe that Utash was not at fault for striking the child, who simply stepped away from the curb and out into the flow of traffic before Utash could see him and stop his vehicle before it hit the youngster.

Onlookers who remained on the scene and were not part of the crowd that beat the trucker say that the group of men involved in delivering the beating ranged anywhere between 6 and a dozen individuals, none of whom has been apprehended. It is unknown if police were able to obtain descriptions of the men involved in the near-fatal attack.