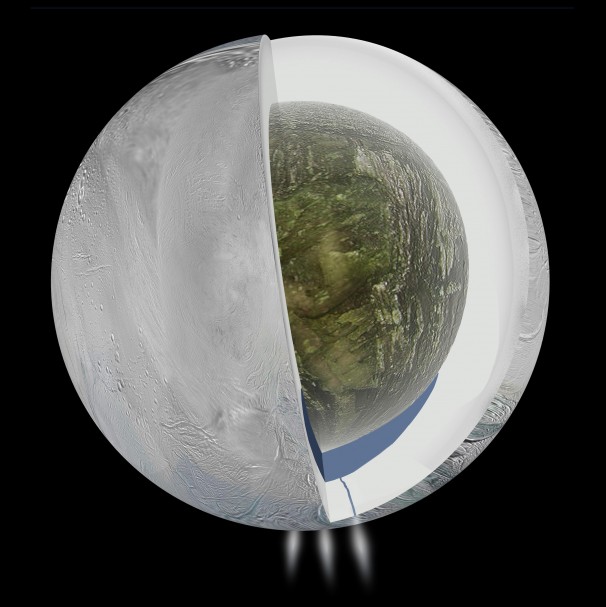 Cutaway showing what may be happening below Enceladus’ frozen exterior. Image: NASA/JPL-Caltech
[/caption]NASA's Cassini spacecraft recently noticed water vapor spewing from Enceladus, one of the 60 moons orbiting Saturn. This got the attention of scientists worldwide. Cassini did several more flybys and further investigation revealed evidence of the possibility of an underground ocean. Scientists think there may be water. And if there is water, chances are great for there to be life as well.

Researchers are focusing on the south pole of Enceladus. They say their study of Enceladus' gravity hints there might be water under the ice on the moon. The information gathered by Cassini was beamed over 1.2 billion miles and studied by a team of scientists from Cornel University in New York, Rome's Sapienza University, the University of Bologna in Italy, and the California Institute of Technology. Their results were published in Science magazine.

Now scientists the world over feel they have presented compelling evidence for the presence of water just below the icy 19 to 25 mile thick top layer on the 310 diameter moon. Water is denser than ice and explains why the southern hemisphere of Enceladus has such an unexpectedly strong gravitational pull. It also explains the water vapor.