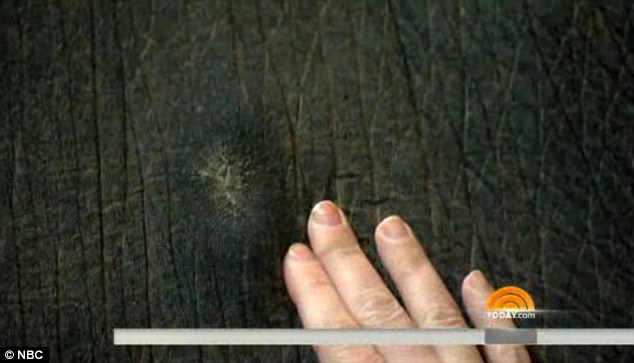 Return: Carol the elephant was shot last year in April while in Tupelo, Mississippi in a shocking crime that has never been solved [/caption]Carol the Elephant Returns to Circus with Street Cred


A shot elephant returns to work after being shot. It was one year ago that Carol the Elephant gained her street cred. That is according to the gansta rapper adage that you're nobody until you're shot.

Someone mysteriously fired upon the pachyderm back at 2:00AM April 9, 2013 striking her in the shoulder while she was in her cage, reports Examiner.

Police reviewed camera surveillance footage to determine the identity of the perp, but the camera lens was untidy to say the least and it made any identification impossible. Finally, a reward of $34,000 was offered for information leading to the capture and prosecution of the assailant, but no one ever came forward with information.

Tupelo Police Lt. Jerry Davis said the case has not been closed, and is hopeful new leads will surface now that Carol’s story is back in the news.

“The case is still being investigated,” Davis said. “Detectives are still working on it; we just do not have any new information to follow up on at this time.” Davis said there is a $34,000 reward for information leading to the arrest of the suspect(s). Elephant and trainer: Kathy Carden said that Carol is ready for her return and has not been affected by the shooting [/caption]

As for Carol, she had to undergo nearly a full year of rehabilitation. Considering the immense body weight of a full grown elephant, damage to the shoulder prevents the animal from being able to walk and possible stand. Now, Carol is set to wow audiences again as the center act of the Ringling Brothers and Barnum & Bailey Circus.

Her trainer Cathy Cardon says that she is ready to return and is better than ever.

Speaking of Carol, Cardon said: “She doesn’t understand that somebody tried to maliciously hurt her; she doesn’t understand that. She just had a little boo-boo; we fixed it right away. They intentionally tried to harm Carol, kill Carol, but they could have killed anyone of us. We were all in R.Vs. We were parked in my R.V. with my family, my two little boys and my husband.” Wound: This is where Carol was shot - just behind the neck in the shoulder [/caption]

Police will be providing increased security against any further assault on the animals. The mayor of Tupelo says the attack was blemish on this city of nearly 140,000 residents. He is also personally peeved that no one came forward to help identify the person who carried out this act of cruelty. Camera shots of Carol show that she bears the scar from the gunshot wound on her shoulder.

Not everyone is please with Carol's return. A Change.org petition has been signed by 17,000 people demanding that the elephant be allowed to retire.

The petition reads in part:

Please sign this to show Ringling Bros that you are against them putting Carol on tour after she was just shot in a drive-by. This is the least they can do when these animals are out there performing their entire lives for the circus.

What do you think of the shot elephant return to the ring? All healed: There are still bullet fragments in Carol's wound which means that police have not been able to do a full ballistics analysis of the shooting[/caption]
Source:
Carol the elephant unpacks her trunk and is welcomed back to the circus: Barnum & Bailey favorite prepares for return to where she was SHOT last year
http://www.dailymail.co.uk/news/article-2596323/Carol-elephant-unpacks-bags-welcomed-circus-Barnum-Bailey-favorite-prepares-return-SHOT-year.html

Ringling Bros: Retire Carol the elephant who was shot in a drive-by
https://www.change.org/petitions/ringling-bros-retire-carol-the-elephant-who-was-shot-in-a-drive-by

Related Topics:shot elephant returns
Up Next

Texas Chupacabra: Living Chupacabra May Have Been Caught