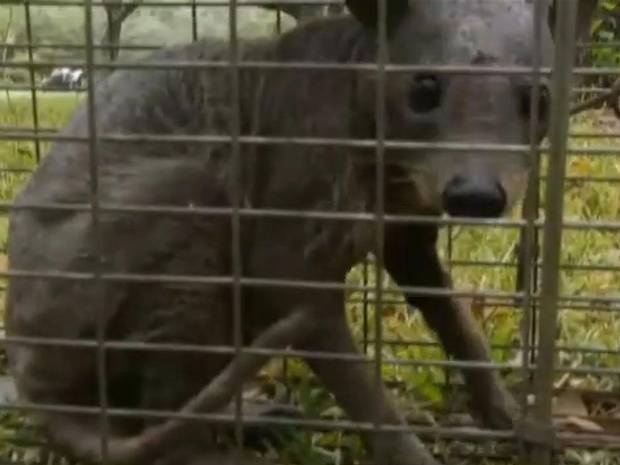 Victoria, Texas - An East Texas family believe they have a living chupacabra in captivity.

According to ABC News, the dark haired and mangy dog-like animal was supposedly caught munching on raw corn in a tree.

Since that time, it has been kept in a dog cage.

Unlike others who can only claim to have "seen" the mythical creature, this family at least has a peculiar animal for experts to examine. It should be noted that thus far, the scientific community does not recognize the existence of the beast rumored to kill goats and suck their blood hence the name “chupacabra” or "goat sucker".

The animal looks like a smaller mangy hyena with a narrow snout. However, its front paws contain movable digits like a koala.

That is not something seen any existing species of a dog. Skeptics remain unconvinced and it doesn't appear that anyone is taking the claim seriously that the mythical creature has been captured.

It is interesting that the fellow Texan who claimed to have dropped big foot a few years ago and produced a disemboweled body on ice caught more attention that this living critter.

Others think the animal is a fox or coyote, but again, those animals have front paws not movable digits capable of grabbing hold of objects and using them to eat food.

In Dewitt County, most people are convinced this is the elusive chupacabra, but what do wildlife experts have to say? "The animal in the cage as best I can tell from the view is some form of a small canine," said Brent Ortego, a biologist with Texas Parks and Wildlife.[caption id="attachment_82430" align="aligncenter" width="150"]

An image of the Chupacabra based on its original description.
[/caption]

"It's never been proven to be a unique species, it was always something out there that allegedly was said to cause harm or threaten to cause harm to people or to livestock," he said.


In July 2004, a rancher near San Antonio, Texas, killed a hairless dog-like creature which was attacking his livestock. This animal, initially given the name the Elmendorf Beast, was later determined by DNA assay conducted at University of California, Davis to be a coyote with demodectic or sarcoptic mange.

In October 2004, two more carcasses were found in the same area. Biologists in Texas examined samples from the two carcasses and determined they were also coyotes suffering from very severe cases of mange.[11] In Coleman, Texas, a farmer named Reggie Lagow caught an animal in a trap he set up after the deaths of a number of his chickens and turkeys. The animal was described as resembling a mix of hairless dog, rat, and kangaroo. Lagow provided the animal to Texas Parks and Wildlife officials for identification, but Lagow reported in a September 17, 2006, phone interview with John Adolfi, founder of the Lost World Museum, that the "critter was caught on a Tuesday and thrown out in Thursday's trash."

In mid-August 2006, Michelle O'Donnell of Turner, Maine, described an "evil looking" rodent-like animal with fangs that had been found dead alongside a road. The animal was apparently struck by a car, and was unidentifiable. Photographs were taken and witness reports seem to be in relative agreement that the creature was canine in appearance, but in widely published photos seemed unlike any dog or wolf in the area.

Photos from other angles seem to show a chow or akita mixed-breed dog. It was reported that "the carcass was picked clean by vultures before experts could examine it". For years, residents of Maine have reported a mysterious creature and a string of dog maulings.

What do you think the Chupacabra is?