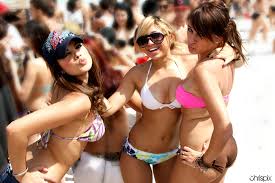 100 arrests At Spring Break Bash[/caption]Spring Break Booze Party Turns Violent in Santa Barbara - 100 Arrested
Isla Vista, California - This quiet city of 23,000 people along the California coastline of Santa Barbara County likes to tap into the wealth that spring revelry brings when thousands of supposed college students converge on the city for binge drinking that is supposedly letting off the hard work from intensive studying during school. Quite likely those interested in bringing in the students are the local bars, hotels, and motels with local residents putting up with the traffic and noise.

However, this weekend, the city got a lot more than it bargained for when the annual party, known as Deltopia by its participants, got way out of hand. Before long, students were rioting in the streets, but it isn't clear just what they were rioting over. However, it probably wasn't the Russian invasion of Crimea or President Obama's individual mandate for health insurance.

At about 9:30PM, locals had enough of the unruly young adults whose drinking had them hours away from regaining their complete faculties and police were brought into disburse the crowd. That's when things got out of hand and before long the crowd was hurling beer bottles, bricks, and other objects at the police. The crowd also turned to ripping out street signs and breaking the windshield of cars other than their own. It took police over four hours to quell the violence and arrest 100 hooligans. A total of six officers were injured. One officer took a brick in the face and another had a hooligan crack him in the skull with a bottle filled backpack. Among the partygoers, 26 people were taken to the hospital for various injuries.

There were 15,000 people who are estimated to have participated in the so-called "fun" and partying. The question now remains as to who will pick up the tab for the destruction of property, overtime for police officers, and hospital charges? Related Topics:100 arrests
Up Next