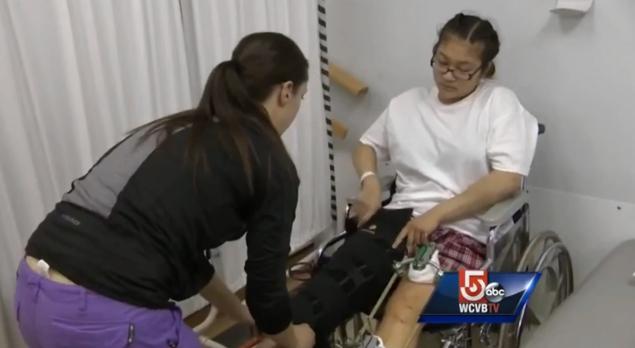 Mindy Tran, of Lawrence, Mass., was crushed by her own car after she tried to stop it from rolling into traffic with her toddler daughters inside. [/caption]Mother Becomes Human Speed Bump to Saving Twin Girls from Rolling into Traffic

Metro-Boston, Massachusetts - Mrs. Mindy Tran was leaving her residence with her two twin girls safely secured in their child seats when she stepped out of the car to lock the front door. However, the car was not in park as she expected and it began to slowly roll out of the driveway putting it on a trajectory towards a heavy traffic intersection.

By the time she noticed what was going wrong, she didn't have time to reach the driver’s seat and did the only thing she could think of to stop the car until help could arrive and that was to use her body as a quasi-speed bump.

Her motive was to save her daughters and she took no thought for her own welfare. Her gamble paid off as the car did stop when it began to pass over her sufficient for a neighbor to reach into the car and set the emergency brake. Tran's left knee was crushed and her right leg was dislocated from her hip. She is undergoing intensive rehab to walk again.[/caption]

However, the price she paid for her heroic action was severe: a dislocated hip and a crushed knee. She also had to endure the pain until emergency responders were able to arrive and safely get the car off her without putting her at further risk.

Her recovery will not be easy. She's already had to have extensive surgeries to ameliorate the damage. Doctors also say her physical rehabilitation will also be extensive and qualifies as having to re-learn to walk. Undaunted, Mrs. Tran says it was all worth it as she'd do anything for her babies. WCVB Tran said she thought her car was in park when she stepped out of it to lock her front door. The car began rolling down the driveway of her Lawrence, Mass., home.[/caption]