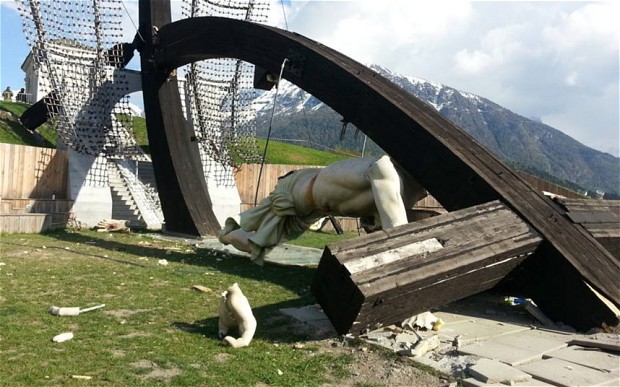 The man, named as Marco Gusmini, was posing for a photograph with a group of friends in front of the 100ft-high cross when it suddenly collapsed Photo: NEWSFOTO[/caption]Pope John Paul II's Crucifix Collapses Killing Man

Brescia, Italy - A freak accident occurred just outside this Northern Italian city of 197,000 people yesterday when a 30 meter (~100 ft.) tall wooden crucifix built in commemoration of Pope John Paul II's 1978 visit to the city unexpectedly tumbled to the ground. The religious monument collapsed onto an innocent bystander who was only 21-years-old. The male victim was said to have died instantly from the sheer weight of structure. The crucifix bore an image of Christ atop. It is believed the crucifix weighs 600 kg (1,320 lbs).

At the time of the accident, there were two children in close proximity, but they were unharmed. The structure was the creation of Italian sculptor and noted film production designer Enrico Job. It is only the second reported death by a falling crucifix in this heavily Catholic nation. Roughly ten years ago in the southern city of Sant'Onofrio, a woman lost her life when a 7 ft. tall metal crucifix collapsed onto her.

The accident occurs with the canonization of popes John Paul II and John XXIII scheduled for this coming Sunday, April 27. Pope John Paul II's canonization was finally approved when the Catholic Church verified that one final miracle was attributed to him when a woman was healed of her malady by looking at a photograph of him. Pope John Paul II served in the role of pontiff from 1978 to 2005. At the time of his ascendancy to the head of the world's largest Christian church, he marked the first non-Italian pope for the Church in over four hundred years.

Pope John Paul II's tenure has been credited with initiating many reforms inside the church and inspiring freedom movements throughout communist Eastern Europe including his native Poland. In addition, he led to interfaith cooperation between Catholics and Jews who were still largely suspicious of one another at the time.