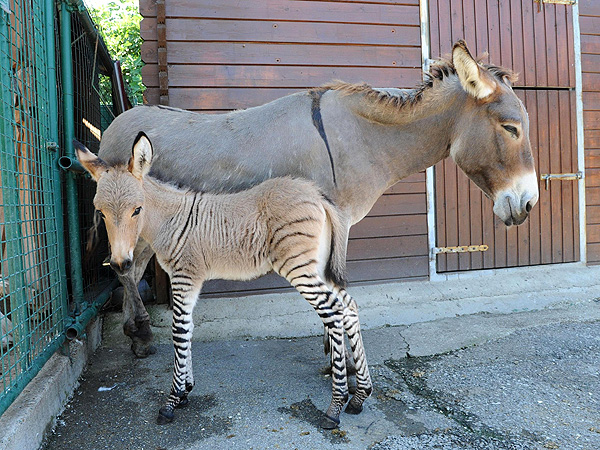 Tamaulipas Province, Mexico - In Spanish, the word for a zebra is "cebra" and a donkey is "asno". Well, "burro", as in the ubiquitous Mexican food item called "burrito" is more common, but "asno" works better for creating a quasi-compound noun of "cebrasno" to denote the hybrid calf spawned from a female zebra and male donkey. The "cebrasno" has been named Khumba and is most interesting creature. Its head and torso clearly are that of a common ordinary donkey, but its legs are stripped just like a regular zebra. Let's hope zebras aren't as cruel as children can be as this one animal would have a most difficult time if he were to have been born a human with appendages of one color and the torso and head of another.

Such crossbreeds are quite rare and this one was recently born at the Reynosa Zoo in this Northern Mexican province. Khumba is rare on two counts. First of which is the chromosomal incompatibility of zebras and donkeys. That genetic difference alone should have prevented its birth, but sometimes nature has a way of making life work that science cannot yet account for. The second point of rarity is that Khumba's father is a dwarf donkey. So without getting too vivid on the subject of animal mating patterns, the conception would seem to be a feat of gymnastics that would make a Kama Sutra yogi proud.

Khumba, born on April 21, now joins an elite club of "cebrasnos" which exist in the United States, China, Italy, and Japan. In the world of crossbreeds one of the more notable ones is the beefalo or buffalo and cow crossbreed. Supposedly, the flesh is better tasting and healthier owing to the buffalo part. Another odd mix is a whale and dolphin which is called a wolphin. Such interesting crossbreeds are sterile.