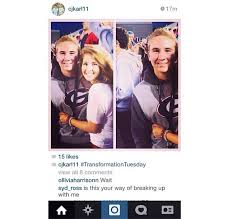 This is, without a doubt, the worst way to be dumped: The Hashtag Breakup[/caption]As technology grows rapidly, so do the ways in which we breakup with that special someone in our lives. But of all the new ways to breakup with someone, which way is the worst? Of all the latest social networking sites, it’s going to be hard to believe to see how some people are doing these days.

One of the top social networking, Instagram, has been the recent highlight in the misfortunate world of breakups. What some people are doing now is taking a recent snapshot of “the couple” and cropping out their ex, only to merge the newly cropped image of the newly solo lover next to the original photo of them both.

This breakup trend isn’t only occurring on Instagram, but is instead becoming a new form of social norm, that adolescents everywhere are beginning to do. The ironic thing about the “before and after” snapshots, is that the use of these types of pictures started out with simple things, like the before and after shots of a new haircut.

The original Instagram and social media trend’s hash tag is #TransformationTuesday. Is it too hard to believe that this hash tag is what led up to the new teen breakups? Today, any teenager or young adult has ample resources to take the original pics, upload them to their favorite photo editing app or program, and to crop out their ex-boyfriend or girlfriend.

With the near-limitless full access to social media sites such as Instagram, Facebook, Twitter and Tumblr, anyone can turn a cute picture of themselves and their partner into a modified, cropped version. Some of these sites even allow individual photo editing (which includes full cropping capabilities) directly from the website. This new trend is sure to bring about sparks, but not the kind full of hearts.