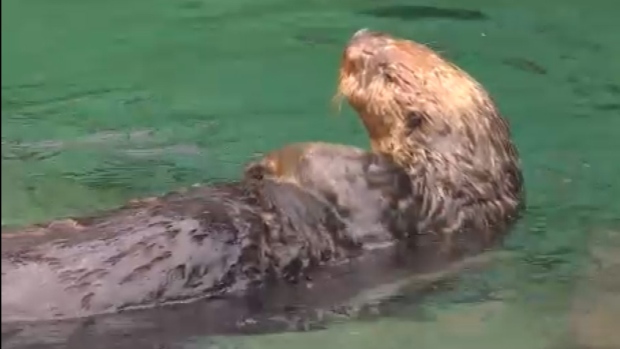 Walter the sea otter has been moved to the Vancouver Aquarium and is recovering from wounds to his eyes, face, and flipper according to Canadian officials. The sea otter was found on the Tofino coastline after reports came in that the animal was behaving strangely last October. Veterinarians determined that Walter had been the victim of a shotgun blast that left him blind and unable to care for himself.

“I couldn’t be happier,” said Dr. Martin Haulena. “You have to understand when this guy arrived it was pretty hard to see him. He was in really really poor shape, super skinny and he couldn’t move at all. We’ve been through some big ups and downs. And there definitely times when we thought we were losing him and he’d fight back.”

The otter spent around 11 weeks at the Vancouver Aquarium's Marine Mammal Rescue Center undergoing surgery and rehabilitation. Because Walter's chances of survival in the wild are slim, officials determined him 'non releasable', and he will spend the indefinite future living in the Vancouver Aquarium with three other otters that are also undergoing treatment. Aquarium staff are working with Walter to develop his tactile sensation as a compensatory mechanism for the otter's blindness.

“To have him to this stage is tremendous,” Haulena said. “Is he out of the woods? No. But I think he’s going to have as happy a life as possible.”

Walter was part of a sea otter population that wildlife officials have fostered back from the brink after the otters were almost wiped out by the lucrative fur trade in the early 1900's. The current population is closer to healthy levels, but the species is still listed as having 'special concern' to Canadian wildlife preservation efforts.

Related Topics:Sea Otter Walter moved to Vancouver Aquarium
Up Next

Another Canadian Makes 1,000 Person Shortlist for Trip to Mars