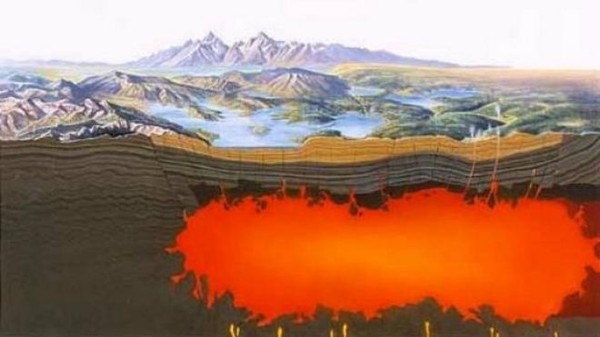 Helena, Montana - According to Jamie Farrell, the lead author in a University of Utah scientific study of Yellowstone National Park's super volcano, the magma inside the volcanic caldera is 2.5 times larger than previously believed and spans a distance of 55 miles. A caldera is a volcano covered by land and which is shaped like a cauldron.

The study suggests the caldera is as wide as 18 miles and has a varying depth of 3 to 9 miles below the surface of the earth. Researchers used seismic reading devices to create a new map of the magma flow believed to be part of the caldera. Should the caldera erupt, it would carry a force greater than 2,000 times that of the 1980 Mount St. Helens explosion. That eruption could have claimed the lives of thousands had not the United States Geological Survey (USGS) vociferously lobbied local authorities to both keep the volcano closed to the public and evacuate the surrounding area.

The Mount St. Helens eruption created an eruption column (hot volcanic ash) which rose 80,000 feet. By contrast, should the Yellowstone caldera erupt, its smoke would circle the planet. Scientists believe the eruption would make a global event causing damage throughout the world. It is believed that the last eruption occurred 640,000 years ago. Some researchers believe the caldera is due to explode soon which notion is disputed by Farrell. He explained that he doesn't know when it will explode, which begs the obvious question of how he is the able to refute those who say the caldera may explode sometime soon.

Related Topics:Yellowstone National Park supervolcano i
Up Next