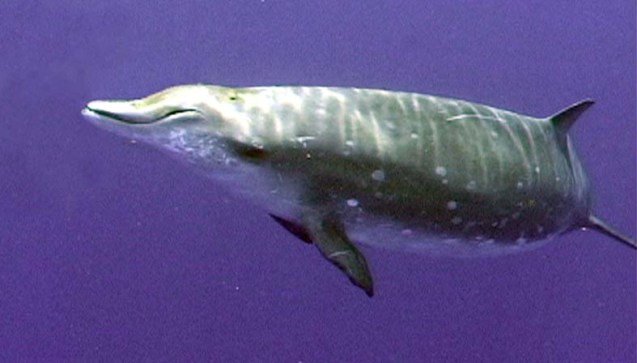 Scientists have successfully tagged the dorsal fins of eight Cuvier's beaked whales in order to track these amazing creatures by the use of satellite-linked tags. This has been done near San Nicholas Island off Southern California's coast, and there is now proof that the whales can dive down almost 1.9 miles (2,992 meters) and be able to spend two hours and 17 minutes underwater, holding their breath, before having to resurface. These studies ranged up to three months between 2010 and 2012 and revealed these longest and deepest dives ever seen among marine mammals.

Part of the study was conducted at the Southern California Anti-Submarine Warfare Range in order to test how the whales responded to MFA sonars in one of the world's most heavily used sonar training areas. It was surprising to find the Cuvier's beaked whales there as they are sensitive to this type of disturbance elsewhere. The U.S. Navy is also very interested in the activities of these whales. The research projects are to see if the whales have unusual or adverse behavior to the sonar, how long the impacts last, and the time it takes to return to normal behavior, which appears to be less than two minutes when they come to the surface between dives.

Diving to tremendous depths in the quest for food, thought to most likely be deep-sea squid, can cause all types of problems including the collapse of air-filled spaces such as lungs. There is also potential for high-pressure nervous syndrome, called "the bends", which can trigger convulsions. However, these marine mammals' rib cages fold down, collapse the lungs, and reduce the air pockets. They apparently are able to dive repeatedly to thousands of feet while suffering no ill effects.

Related Topics:Cuvier’s Beaked Whale
Up Next