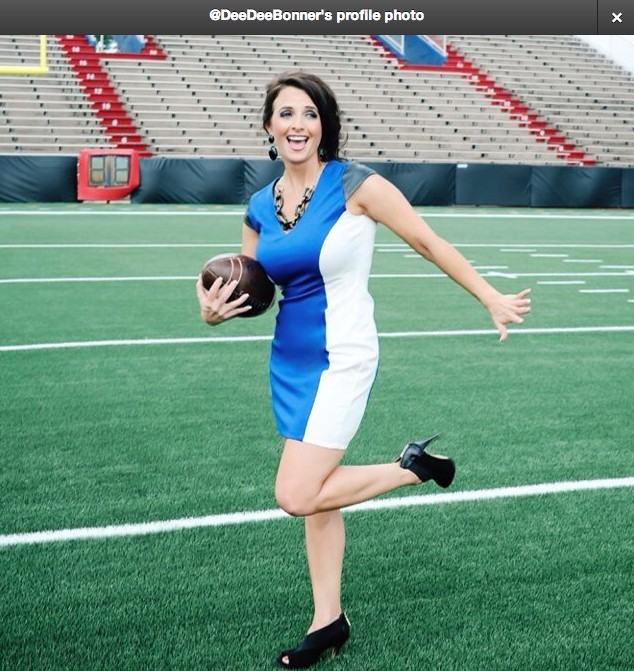 Dee Dee Bonner, the mother of Alabama football quarterback AJ McCarron, changed her twitter profile picture to a photograph of her performing the famous Heisman pose.

The picture is thought to be taken from the ACCESS magazine article where Bonner posed with McCarron's girlfriend, Katherine Webb.

Bonner's pose is considered to be part of a campaign for the Heisman Trophy. The trophy awards the year's most outstanding college football player "whose inventiveness and contribution to football strategy is without compare," according to the awarding organization's website. Made in 1935 and modeled by Ed Smith, the trophy's famous pose depicts a player "stiff-arming" while holding a football and running to the side.

This year, December 14 will mark the 79th time the trophy has been awarded, and pundits speculate McCarron to be dark-horse candidate. Campaigns have been known to go as far as producing cereal boxes and chocolate bars to promote eligibility for the award.

So far, McCarron's campaign has been low-key. According to Sports Illustrated, his school's associate direct for athletic communications said they only plan to send out a few e-mails highlighting some accomplishments, like an MVP award in a defining 2012 game and three consecutive solo national championships.

On The Web:
A.J. McCarron’s Mother Changes Her Twitter Avatar To A Photo Of Herself Doing The “Heisman Pose”
http://collegespun.com/sec/alabama-sec/a-j-mccarrons-mother-changes-her-twitter-avatar-to-a-photo-of-herself-doing-the-heisman-pose
AJ McCarron is royalty in Alabama, underrated everywhere else
ttp://sportsillustrated.cnn.com/college-football/news/20131121/aj-mccarron/