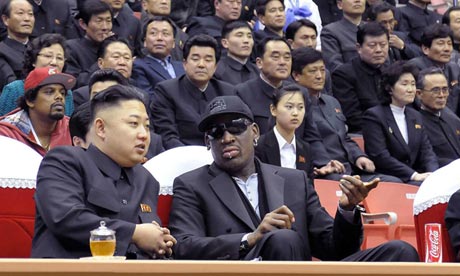 Basketball superstar Dennis Rodman, already on very good terms with government officials in North Korea, has announced he will conduct an exhibition tour of the game in that country in December. In announcing his upcoming tour, Rodman declined to comment on whether he thought that President Kim Jong Un would use the sporting event for political purposes. Rodman also reports that he expects that 12 former NBA players would accompany him on the tour and has been talking with pals about joining him.

"I have seven people right now," Rodman said. "I talked to a couple of guys last week. Lot of guys are saying, 'OK, great. I'll go. We'll go.' But I'm not saying this to get people to go over there to prove a point — 'OK, great, let's go over there and make a difference.'

"No-o-o-o-o-o," he continued. "Let's go over there because this is a great opportunity for everyone to see a different culture. ... 'This country is so bad. This city is so bad.' OK, great, come see it and tell the world when you come back, 'Hey, it's not as bad as you think.' And that's why I'm taking NBA players over there, to show them, so they can come back and talk about it."

Rodman insists he is not trying to prove any point with the exhibition tour other than to have people exposed to a different culture and perhaps return back to the U.S. with a different perspective about North Korea and its people. He said he looks forward to having other NBA players return from the tour in order to be able to share their experiences with others. Rodman refused to answer any questions during the press conference about his relationship with Kim Jong Un and the extensive human rights violations allegedly committed against the Korean people. He also refused to weigh in on the current situation regarding U.S. veteran Merrill Newman who is being held hostage there.

On a last note and a sick turn of events this basketball betting website is even allowing punters to place bets on which team will win. We venture that whoever wins we'll never know the truth!

On The Web:
Dennis Rodman to tour North Korea