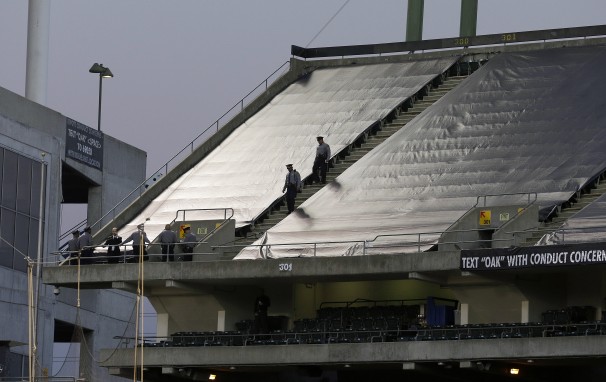 A woman tried to end her life on Sunday, November24, 2013, after the Raiders game in Oakland, California. In a preventive effort, a 61 year old man puts himself in harms way to keep her attempt from being successful. This retired Marine, and heroic Raiders fan, was initially trying to talk the woman down from a ledge on the third tier at the O.co Coliseum. Then when she jumped he tried to catch her. This all happened a short time after the game was over.

They were both taken to the hospital to receive immediate medical attention. The woman was unconscious and in critical condition, while the man was admitted in stable condition. Authorities have not identified either of them by name.

The sheriff of Alameda County, Sgt. J.D. Nelson said the woman would certainly have died at the scene if her fall had not been broken. There have been several deaths in the past resulting from incidents where fans have fallen from railings in stadiums. This compassionate Raiders fan was quoted as having said that he just could not bear the thought of the other people around them seeing her die in this way.

"He saved her life, quite honestly, at his own expense," Alameda County Sheriff’s Office spokesperson, Sgt. J.D. Nelson, told reporters. “This guy 100 percent saved her life. She’d be dead now.”

"He just couldn't imagine having people see that," Nelson said. "He said it was a reaction. Even now, at the hospital, he's very concerned about her. He's a real compassionate person. Raiders fans get a bad reputation, yet here's this guy who went way over and above what most people would do to try and save this woman.”

His concern for her life was overwhelmingly significant as he continued to ask about her status at the hospital. If this determined man had not made this daring attempt there would be a very different account of this story. This is truly a testament to the kindness of strangers.

Related Topics:Raiders fan woman
Up Next