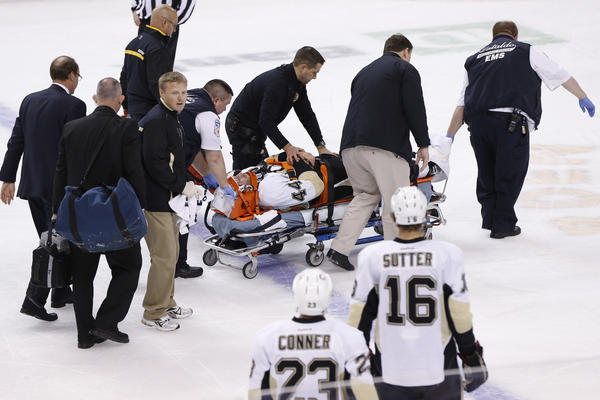 Saturday night's match between the Boston Bruins and the Pittsburgh Penguins turned ugly in the first quarter due to a hard take down of Brooks Orpik by Shawn Thornton. Thornton, the sixteen year NHL veteran from Canada, truly knew better when he let his emotions get the better of him. He was incensed by a hit Orpik scored on his fellow teammate Loui Eriksson which wasn't called by the referees.

Thornton called out to Orpik to settle things with fists, but Orpik wasn't interested in an ice brawl. Several minutes later, Thornton skated behind Orpik, who was engaged in a conversation with teammates following the end of a play, and pulled him down to the ice where Orpik's head struck the ice hard. Thornton then proceeded to punch Orpik who lay in a trance-like state. Medical responders arrived and carried Orpik to the hospital where the spent the night under observation.

“Listen, I feel awful,” he said. “It wasn’t my intention for that outcome. I know Brooksie, I’ve gotten to know him over the past several years. I got to skate with him during the lockout. I texted him a couple of times. I feel awful. It was definitely not what I wanted to see or what anyone wanted to see. “Obviously I made a mistake. I’m aware of it. I’ve been told I’ll be having a hearing. It’s hard for me to say much more than it was not my intention. I felt sick all game. “It’s always my job, I guess, to defend my teammates, but I’ve prided myself for a long time to stay within the lines. It’s hard for me to talk about it right now. I can’t say I’m sorry enough, and I’m sure I’ll be criticized for saying it, but it’s true. I just hope he’s doing all right. I heard he’s conscious and talking. I’m happy to hear that. “I really don’t know how to answer that right now [if this will change the way he plays], to tell you the truth. I haven’t had enough time to think about it.”

Now, Thornton has his conscience to deal with and confesses he did wrong in attacking Orpik. Thornton stated that he communicated his remorse to Orpik personally and apologized. However, the matter isn't over yet. The native of Oshawa, Ontario, will be meeting with the Department of Player Safety where he will likely be disciplined with a suspension.