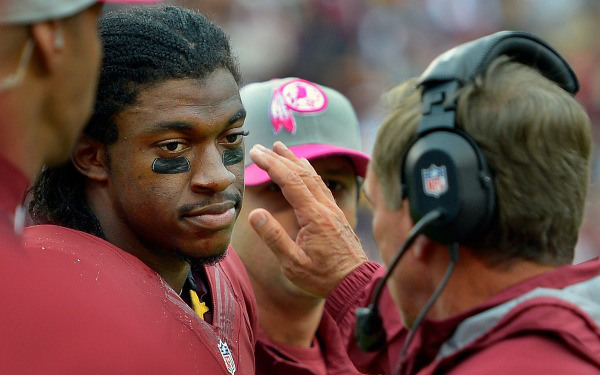 The 2013 season has been wasted for the once hopeful Washington Redskins. Aspirations have failed, leaders have fallen, and their coach is probably on his way out. What all happened? Of course there was the infamous RG3 knee injury which was followed by the star QB being rushed back too soon and then there was RG3's father.

According to reports RG3s father, who was heavily involved with Robert Griffin IIIs development at QB during his college career, has been privately pushing for the removal of Mike Shanahan. These reports come on the heels of his suggestion that Baylor coach Art Briles be hired for the head coaching position of the Washington Redskins.

Younger RG3 has also been a bit of a headcase this season: ignoring criticism and coach suggestions, being called arrogant by teammates, and even quitting talking to head coach Mike Shanahan following his benching. The Redskins are a franchise that is historically embattled by controversy. For once the future looked bright for the team, with the Shanahans leading RG3, but now that glimmer of light is already dimming. Looking to next year it will be hard to imagine the Redskins as much of a competitive football team.

On The Web:
Report: RG3?s dad a nuisance for Redskins, pushing for Baylor’s Art Briles
http://news.gnom.es/sports/report-rg3s-dad-a-nuisance-for-redskins-pushing-for-baylors-art-briles

Related Topics:RG3 father a nuisance |
Up Next