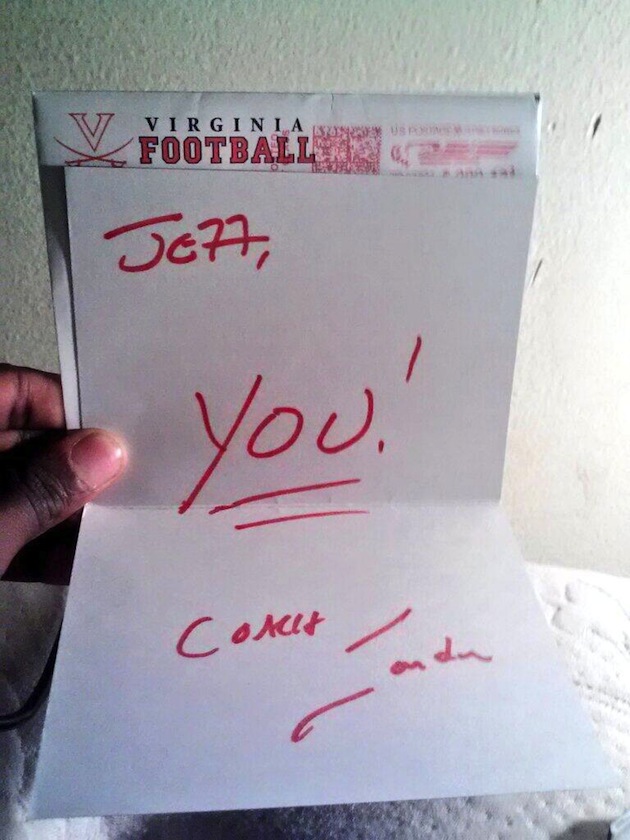 Jeffrey Farrar of Upland High in California was being sought after by college coaches across the country. People in his position are inundated with letter after letter making a sales pitch of why their school offers them the best opportunity to play the sport and gain an education. That was certainly the case for Farrar. However, he finally arrived at his choice for a team after a special appeal from the head coach from the University of Virginia.

So how did the University of Virginia's head coach sway young Farrar to join his team? The short answer is actually the answer. The head coach texted him the message "You!" The full message addressed him by his first name, included the one-word with exclamation mark and then had the coach’s name. It worked.

So now Mike London has the player he wanted and it didn't even take a load of palaver to work. Farrar's recruitment makes the second top-rated pick the Virginia Cavaliers have managed to secure for the 2014 football season. Coach London is making a name for himself as being as good a recruiter as he is a football coach. In football as in romance, it really may be the little things and that personal touch that count.

On The Web:
Coach gets creative, sends one-word letter to impress recruit — and it works
http://msn.foxsports.com/college-football/story/coach-gets-creative-sends-one-word-letter-to-impress-recruit-and-it-works-121913