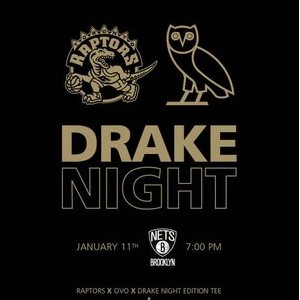 Not since Jay Z became a minority owner of the Brooklyn Nets has a hip hop music performer had this much influence on an NBA franchise. The very popular rap music superstar, Drake, has always worked closely with his hometown's basketball team the Toronto Raptors. He is the team's official global ambassador as well as one of it's biggest fans.

Drake's influence over the youth market in Toronto is so strong that the Raptors have scheduled to have a special promotion titled "Drake Night." Unveiled at that special January 11th contest against Jay Z's nets will be a new and special uniform that the Raptors players will be wearing. The new unis will be black and gold, a switch off from their current purple and red color scheme.

The nearly 20 year old franchise has kept the same uniform colors since they entered the league in 2005 and the team's management has already scheduled a team re-branding for next season. One of the key changes could be a change of the logo and uniform color's and the Drake inspired black and gold could be a preview of what the new Raptors jerseys may look like.

Drake will continue to tour the world and create music, but it must be nice for him that he is one of Toronto's most influential native sons.

Related Topics:drakeToronto Raptors
Up Next