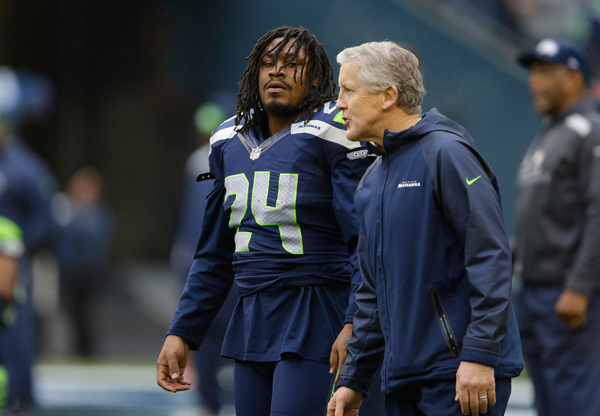 The Seattle Seahawks are the number one seeded playoff team in the NFC and will take on the New Orleans Saints next week in a divisional round match up. All-Pro Running back Marshawn Lynch will once again lead Seattle team on offense but he will be doing it with a much lighter wallet.

It was announced this past week that the NFL was fining the star player has not spoken to the media at all during this season. As part of their union agreement all players must make themselves available to speak to the press at a minimum of two times per week. Lynch was fined $50,000 which is the largest fine for such an offense in the history of the league. Petulant wide receiver Randy Moss was the previous highest fined victim for this offense when he was penalized $25,000 as a member of the Minnesota Vikings in 2010.

Marshawn Lynch has not made a statement about the fine yet, as he has done all year he will attempt to do his talking on the field. The veteran tied his career high by scoring 14 touchdowns this year in helping to lead the Seahawks to the best record in the conference. The Saints and Seahawks will face off this Saturday at 4:35pm.

Related Topics:marshawn lynch fined
Up Next