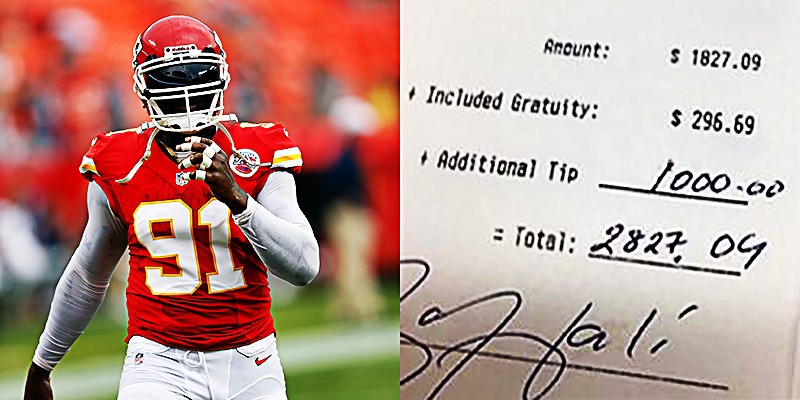 Today marks the AFC wild-card game at 3:35PM EST between the Indianapolis Colts (11-5) and the Kansas City Chiefs (11-5). The Colts have the home field advantage, but Kansas City has karma on their side. That is because their star linebacker Tamba Hali shared some good will with the restaurant staff at a local Brazilian food restaurant in October. The occasion was his team's victory over the Houston Texans that extended the Chiefs undefeated record.

It bears mentioning that the Chiefs had a deplorable 2012 record of 2-14. They became the Cinderella story of 2013 by winning their first nine games of the season, before stumbling through the latter half of the season. In all, they finished respectably with an 11-5 record. Well, against that backdrop, Hali took fifteen of his mates out to celebrate with some good Brazilian chow. The bill totaled $1,827.09 and a $296.69 20% gratuity was added. However, Hali went above and beyond and added $1,000 more to the tip.

"I have been helped all my life to this point. ... I can give back [and] I try to do that," he said. "I do this all the time when I go out because these people work hard. I'm just fortunate to be in this position."

An employee at the restaurant said that Hali's kindness touched all of the staff and made for a very pleasant day. Now, if the saying holds true that what goes around comes around, the Cinderella story for the Chiefs may continue for at least another week.

Related Topics:tamba hali tip
Up Next