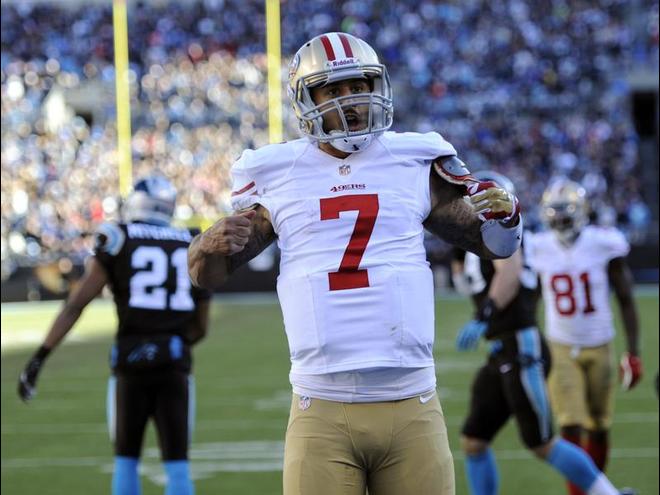 Not only does San Francisco 49ers quarterback Colin Kaepernick have amazing running and passing skills; it turns out that he's quite an accomplished mimic as well. Kaepernick proved his ability in all three areas in the 49ers' big playoff win in the Divisional round of the NFC showdown against the Carolina Panthers on Sunday. After dashing away from defenders in a four yard touchdown run that put his team up by ten points, Kaepernick spiked the football to the ground and copied the touchdown celebration of Carolina quarterback Cam Newton. Newton who is the Heisman Trophy winning signal caller for Carolina often pantomimes opening up us shirt much like Clark Kent during his transformation to Superman.

The hometown fans of the Panthers didn't appreciate Kaepernick's impression as others might have but then again the fans in Carolina didn't have much to be happy about that day as their hometown team was sent packing from the playoffs by losing 23-10. The 49ers are just won win away from the Super Bowl. They'll travel to Seattle next weekend for the NFC Championship game against the Seahawks.

Colin Kaepernick fell way short of apologizing for his celebration and his 49er teammates seemed to have his back. Cam Newton acknowledged that he saw the homage, and you can be sure that he'll have that in the back of his mind the next time he lines up against San Francisco.

Related Topics:kaepernick superman
Up Next

John Daly wins a car but not really