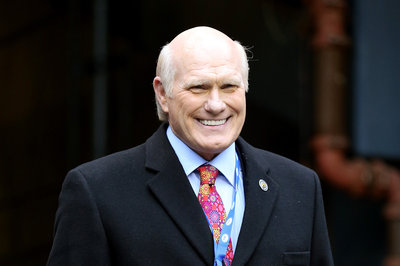 Terry Bradshaw expected to be one of the broadcasters for the 48th Super Bowl Sunday, but had to decline the honor at the last minute due to the death of his father. William "Bill" Bradshaw, who lived in Louisiana, succumbed last week after being sick for some time with an unspecified illness. He was 86. Producers acted quickly to replace Bradshaw for the scheduled pre-game show highlights, tapping Michael Strahan of Fox Sports to take Terry's place. He joined a broadcasting line-up including Howey Long, Jimmy Johnson, Curt Menefee and Jay Glazer. Since Strahan was scheduled to handle red-carpet interviews, producers replaced him on that gig with Chris Meyers.

Officials at the Fox Television Network, which broadcast the Super Bowl on Sunday evening from MetLife Stadium in East Rutherford, New Jersey, released an official statement regarding Bradshaw's absence. They extended expressions of deep sympathy from everyone on the staff at Fox Sports to Terry Bradshaw, his brothers Craig and Gary, and their mother Novis Bradshaw, who survives her husband. In an eerie foreshadowing of his missing the game, Bradshaw had recently appeared in television commercials in which a 10-year old girl won a competition to replace him as commentator.

Related Topics:terry bradshaw death
Up Next