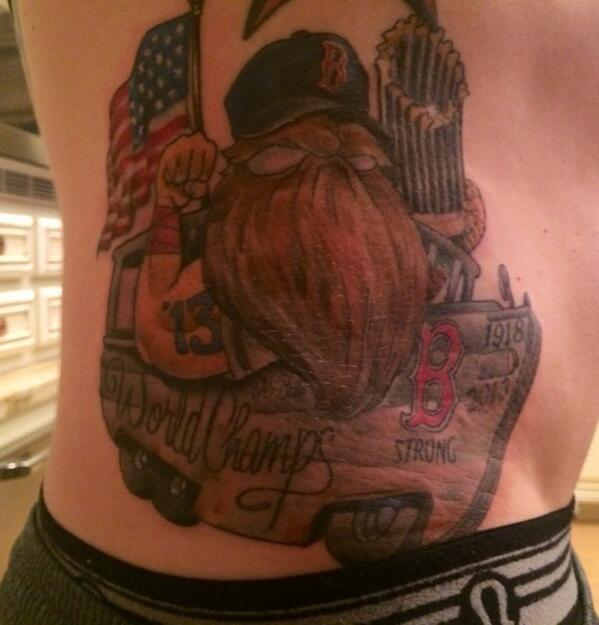 The great reveal is great for reality and fashion shows, but Boston Red Sox outfielder Jonny Gomes did the reveal great justice in the form of his wild new tattoo. Or rather, teammate Mike Napoli did the honor revealing through Twitter that Gomes had gone Red Sox tattoo wild.

Napoli tweeted several photos of the giant-sized torso tattoo Gomes had gotten. It fills his entire right side torso with pretty much a kitchen sink's worth of images, including a duck boat saying B-strong and world champs carrying a bearded who-knows-what with Boston cap holding the World Series trophy in his left hand while flexing a muscle along with his uniform number lucky 13 with his right. A large U.S. flag is in back of the boat. Napoli tweeted "How sick is this," along with photos of the many sides of Gomes and his tattoo. It actually received mainly good reviews from others. Top online commentators seemed to feel nothing was wrong with giant, colorful celebration of the Red Sox 2013 championship.

Tattoo aside, Gomes isn't through with his busy post-championship celebration. It was revealed that he had a deal with Philips Norelco razor company to shave his beard this year.

On The Web:
Tattoo of the Day: Jonny Gomes commemorates 2013 World Serieshttp://www.cbssports.com/mlb/eye-on-baseball/24434616/tattoo-of-the-day-jonny-gomes-commemorates-2013-world-series

Related Topics:jonny gomes tattoo
Up Next

Olympic Oddities at the 2014 Sochi Games