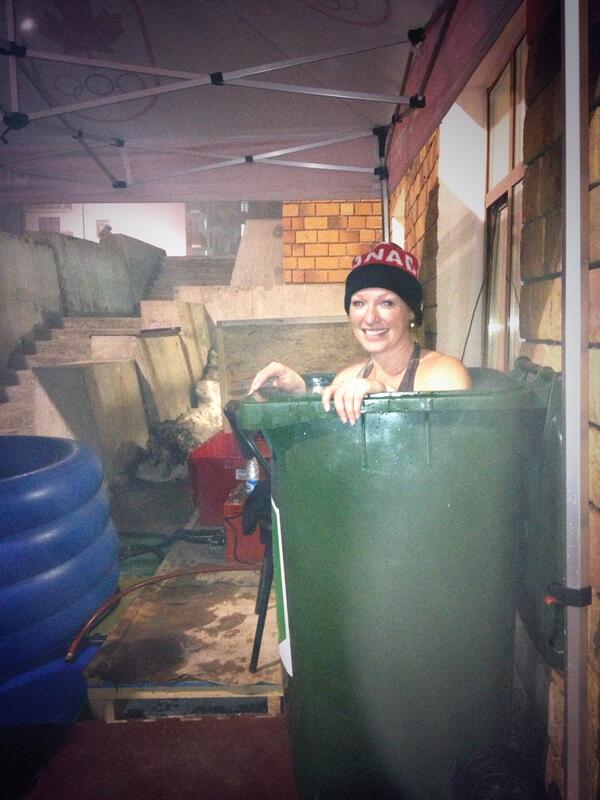 These 22nd Winter Olympics have been notable for a few things. There is a running joke among athletes that the Olympic village was short on luxuries. It is also the first winter games that had such a dramatic presence on social media. So many of the athletes and participants of all countries have posted their accounts of their experiences on sites such as Twitter, Instagram, and Facebook. A Canadian bobsledder by the name of Heather Moyse ruffled a few feathers and raised even more eyebrows with her photographed Tweet showing herself taking a rather uncomfortable bath in a garbage can. The 35 year old athlete from Prince Edward Island did offer an explanation to go along with her photo. She was in strong need of a soothing Epsom salt bath to sooth sore muscles prior to her team's competition. There were no vacant tubs to be found so she improvised by using a spare rubbish bin.

"No bath tubs in the Mountain Village… So just chillin' in a garbage bin doing a hot Epsom salt 'bath'! #NoExcuses," the Olympian tweeted. Moyse is a true athlete that excels in bobsledding and other sports such as cycling and rugby. She was a 2010 gold medal winner at the Vancouver Olympic games alongside fellow countrywoman Kaillie Humphries. Her Epsom salt treatment has done well for Moyse so far, her and Humphries are standing in a firm second place after two runs in the first round of competition.

On The Web:
Why is Olympian bathing in a garbage can?
http://msn.foxsports.com/olympics/story/why-is-olympian-bathing-in-a-garbage-can-021714
http://en.wikipedia.org/wiki/Heather_Moyse

Related Topics:heather moyse trash can
Up Next