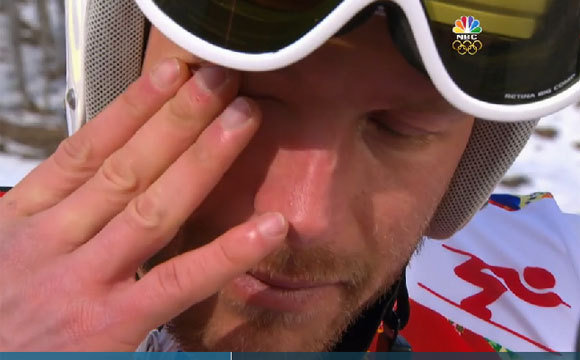 The executive producer of NBC Olympics came to the defense of a reporter who interviewed skiier Bode Miller to the point of tears on Sunday. Jim Bell stated he thought the interview went well, despite the sharp criticism it drew for Christin Cooper's intense and probing interview technique.

Cooper's conversation with Miller, who won a bronze medal, came under fire when she asked how the skiier felt about the loss of his brother, who died one year ago. She continued to push even after Miller was overcome with emotion and began to cry.

Bell was pressed for a response to the interview during the course of a media conference call regarding Bob Costas, who was sidelined from the Olympics broadcast due to an eye infection he contracted in Sochi. "It played out fine," Bell said.

Since the interview, Miller has come to the defense of Cooper, stating that the reporter was only doing her job in the manner preferred by NBC, which includes looking deeply at the personal aspects of competitors' lives. Despite Miller's efforts on both the "Today" show and Twitter, the network was taken to task by the New York Times, which accused Cooper of insensitivity and being intrusive and irresponsible during the interview.

"I appreciate everyone sticking up for me," Miller tweeted on Monday. "Please be gentle w christin cooper, it was crazy emotional and not all her fault. #heatofthemoment"

The Miller controversy is the latest in a series to plague the Winter Games, including buildings still under construction and toilet facilities lacking privacy. The United States has won six gold, four silver and 10 bronze medals since the Olympics began on February 7.

Related Topics:Bode Miller Interview
Up Next

Olympic Oddities at the 2014 Sochi Games