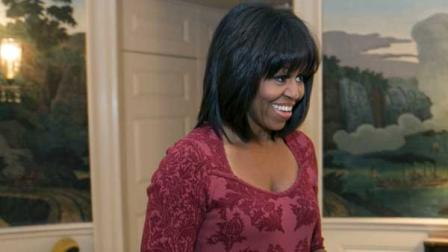 In this image released by the White House, first lady Michelle Obama greets David Hall, one of eight citizen co-chairs for the Inauguration, in the Diplomatic Reception Room of the White House in Washington, Thursday, Jan. 17, 2013. The photo is showing something different about Obama - bangs in her hair.[/caption]Michelle Obama Celebrates Birthday with Style

In celebration of her 49th birthday, Michelle Obama traded in her trademark hair style for a fresh, new look. The new style can best be described as a layered bob with bangs, the latter of which is drawing the majority of the attention.

Obama's new hair style is drawing mixed opinions, but the primary initial reaction appears to be favorable. After posting the new look on her Twitter account, many replied to her tweet with positive remarks. US Weekly tweeted, "We love your new bangs," and Perez Hilton even stepped in to alert his followers to Obama's new bangs.

Her hair stylist, Johnny Wright, said the haircut was not really calculated. "It was something that, you know, I just felt that it would be nice and fresh and it would make her look even more youthful than she already is."

In addition to serving as the First Lady and an international health promoter, Obama is cementing her role as a fashion icon.

Since her husband took office in his first term, Michelle has routinely impressed critics and audiences with her fashion choices.

According to her stylist, Johnny Wright, her hair style in the first term was specifically designed to show the First Lady's youthful appearance.

The choice many black women make to alter their hair's natural texture has undeniable historical and psychological underpinnings. It has been attributed to everything from a history of oppression and assimilation to media-influenced notions of beauty and simple personal aesthetics. But one thing is certain. For the many who wear straightened styles like Michelle's, the decision is deliberate, and the maintenance is significant. A stylist hypothesized in the Inquirer article about the steps taken to attain her look, and a firestorm of online comments followed, including these two:

Chemicals, hot comb, round brush and dryer ... same effect, different methods. I could see it being a big deal or inspirational if she were natural and wore it in natural styles."

"Girl, ain't no braids, twists, afros, etc. getting into the White House just yet ... LOL."

According to ABC News, the first lady celebrated her birthday at a Georgetown restaurant, Cafe Milano, on Thursday night, with the president. Boy George Weight Loss: Singer Is Half The Man He Use To Be (PHOTO)