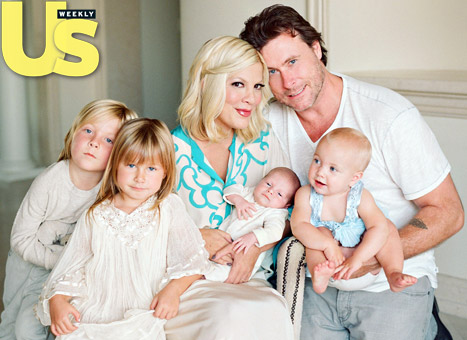 Tori Spelling Rips Mag for Divorce Story[/caption]Actress Tori Spelling slammed Star Magazine on her blog today for publishing a story that claims she and her husband are divorcing. Spelling has been married to 46-year-old Dean McDermott for seven years and says the story is not true. She is also very angry that photos of her children were used to illustrate the question of who would get custody.

Spelling, 39, was grocery shopping with two of her children when her son, Liam, spotted the magazine. Having recently learned to read, he was able to sound out the word "divorce" and became frightened that his parents would be going away. After reassuring her children the story was a lie, Spelling went home and wrote the blog post.

"I had to hurry him and his confused 4-year-old sister Stella out of the grocery store and into our car," Spelling wrote. "By the time he was fastening himself into his car seat he was asking, 'Why is someone getting us?? Where are you and Dad going?'

"He was anxiously biting his lower lip," she continued, "and his big blue eyes were filled with tears. My heart sank. How would I explain to my children that what these 3 writers who have never even met us but who claim to know the ins and outs of our relationship and have proudly put their names on this article are flat out writing lies?"

Spelling firmly stated that McDermott has always been a supportive partner and father, and she is very lucky to have him in her life. The couple also has two other children.

Related Topics:Tori Spelling
Up Next

Mariah Carey Wardrobe Malfunction: Hmm Not So Much