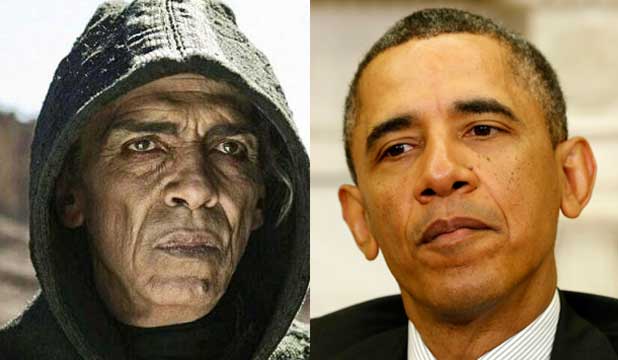 Mark Burnett and actress wife Roma Downey, producers of the new miniseries "The Bible", are refuting criticism generated by conservative commentator Glenn Beck that the actor who portrays Satan in the highly-rated TV series is a look alike for President Barack Obama.

"Anyone else think the Devil in #TheBible Sunday on History Channel looks exactly like That Guy?" Glenn Beck - an early adopter - tweeted over the weekend.

Hours later, Beck chastised himself for making the comparison, saying: "Media - relax. Actor has been in similar roles b4. Funny, nothing more." He added: "For different reasons, #TheBible is 1 of my fav shows. Keep watching."

Both Burnett and Downey say that they are staunch supporters of the current resident of the White House and are distressed that a recent comparison of facial resemblance of the Moroccan actor who portrays Satan to the President is simply an attempt to turn the spiritual focus of their mini-series into something political.

On Monday evening, the hashtag #ObamaIsNotSatan was trending worldwide on Twitter.

"They do look alike, you got to admit that," CNN newsman Wolf Blitzer said Monday on The Situation Room.

"History channel has the highest respect for President Obama. The series was produced with an international and diverse cast of respected actors. It's unfortunate that anyone made this false connection. The Bible is meant to enlighten people on its rich stories and deep history."

“This is utter nonsense," Burnett said. "The actor who played Satan, Mehdi Ouzaani, is a highly acclaimed Moroccan actor. He has previously played parts in several Biblical epics -- including Satanic characters long before Barack Obama was elected as our President.”

"Both Mark and I have nothing but respect and love our President, who is a fellow Christian," Downey added. "False statements such as these are just designed as a foolish distraction to try and discredit the beauty of the story of The Bible.”

"The actor who played Satan . . . is a highly acclaimed Moroccan actor. He has previously played parts in several Biblical epics - including Satanic characters - long before Barack Obama was elected as our President."

Actor Mohamen Mehdi Ouazanni's credits includes numerous appearances in biblical film projects, several of which were Satanic characters, but no appearances as a double for Obama. Actress Downey claims that comments like Beck's are an attempt to divert attention from the beautiful stories told by "The Bible" and insists she and her husband hold only high regard and respect for Obama.

An Obama lookalike as Satan? ‘The Bible’ bosses horrified by claim
http://www.suntimes.com/entertainment/18704567-421/an-obama-lookalike-as-satan-the-bible-bosses-horrified-by-claim.html