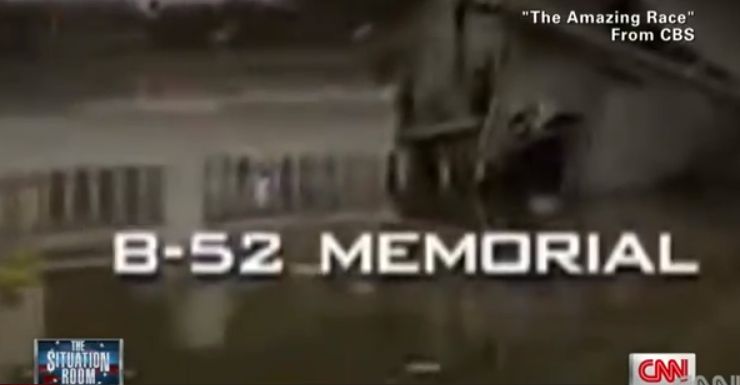 Many veterans who served in the Vietnam War felt angered and insulted when the CBS realty series "Amazing Race" had contestants exploring the wreckage of a downed B-52 bomber on location in Vietnam.

Although the Vietnamese government has since turned the site in Hanoi into an official memorial, many veterans were enraged that "Amazing Race" producers made a visit to the area part of a scavenger hunt necessary to win the competition. Amid mounting criticism from veteran groups across the country, CBS decided to issue an apology to veterans and their families prior to the segment that aired on Sunday, March 17.

When viewers tuned into the "Amazing Race" on that date, they saw host Phil Keoghan read a prepared statement from the producers apologizing to veterans and family members of veterans who felt they had been offended by the show's allegedly turning the site of a violent and harmful war action four decades ago into a backgroup for a television game show.

The National Commander of the American Legion, Commander James Koutz, reported that he felt compelled to accept CBS's apology for the controversial episode filmed in Vietnam because he believed that CBS producers were heartfelt and sincere that they meant no disrespect to veterans.

"I hope you can understand our anger at a show that wasted a golden opportunity to educate as well as entertain," Hamilton wrote to CBS president and CEO Les Moonves. "The scene with the B-52 wreckage could have been used to tell a story about what was then America’s longest war, about the 58,195 American names on the Vietnam Wall, about the 1,652 Americans still listed as missing-in-action, or about the fates of the multiple crewmen aboard each of the 17 American B-52s we lost in combat. The B-52 scene, as well as the young people singing a propaganda song, was totally unnecessary to the show’s plot, which speaks volumes about naïve producers who think they’re in charge when they are not."

Koutz wrote, "What wasn’t shown were the U.S. crewmembers that were killed or the grieving American families that were left behind. The Department of Defense is encouraging Americans to honor and commemorate our Vietnam War veterans for the sacrifice that they made 50 years ago. The American Legion takes this obligation very seriously."

“Parts of last Sunday’s episode, filmed in Vietnam, were insensitive to a group that is very important to us: our nation’s veterans. We want to apologize to veterans – particularly those who served in Vietnam – as well as their families and any viewers who were offended by the broadcast," the statement said. "All of us here have the most profound respect for the men and women who fight for our country."