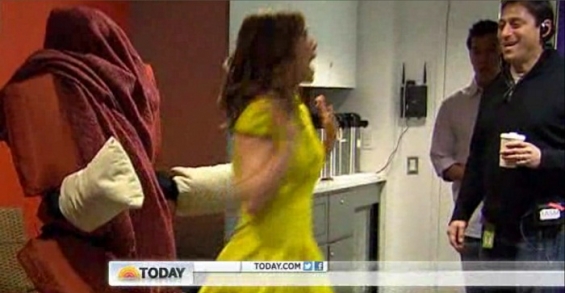 The Today show has not exactly been lighting up the morning show ratings for NBC. That does not mean that the hosts, reporters, and crew are not still trying to have a great time and love their job. No more is this evident than yesterday April 1st as the Today Show had Rich Ferguson, a magician, on as an April Fools guest.

Ferguson was there to share some of his own tips like a fake spider on toliet paper to prank your friends on this international prankster day. His star prank though was dressing up and looking like part of a chair complete with miniature throw pillows for arms. Then he could set in the chair or couch waiting for an unsuspecting victim to come by and try to take a seat.

It just happened that Today Show reporter Natalie Morales happened to be on of these such people. As Morales was chatting away with other Today Show colleagues she went down to take what appeared to be a normal empty seat which turned out to be Rich Ferguson in disguise. She quickly jumped out of her seat with a definite shriek as the rest of her colleagues laughed at the prank. This was definitely one prank Natalie Morales didn't see coming!

Did you see the Natalie Morales chair prank on Today? If not, check out the video of the chair prank below!