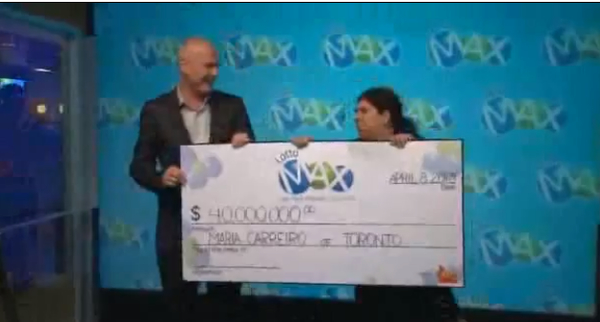 Canadian Woman Wins $40M, not $40K[/caption]Woman Believed She Won $40K Lottery Prize Finds Out It Was $40M Instead

51-year-old Maria Carreiro recalled how she went from delighted to exuberant over winning Canada's lotto Max jackpot this past Friday. The Toronto resident had returned home thrilled over winning $40,000 in the lottery.

She explained to her daughter her delight over winning the small fortune. Her daughter thought it was prudent to verify the prize just in case her mother was wrong.

After an initial check on Saturday morning, she excitedly told her daughter that she had won $40,000.

Maria's joy transformed and the petite and rotund woman took to running down the street shouting for joy over the life-changing lottery endowment.

Her daughter described her mother as running down the street like a "crazy woman". Carreiro's husband did not believe the news at first.

"So I ran down the street like a crazy woman and checked the lottery ticket, and it said $40 million," she said of the winning ticket, which works out to about $39.4 million U.S. dollars.

"And then I go, 'Oh my god!' And I ran back up the street, home. And then I go, 'I need a glass of water,' " added an ever-smiling Carreiro, stirring laughter from the press corps.

He thought his family was "punking" him. As for any life changes they plan to make, Carreiro's husband informed his boss that the following Monday would be his last day on the job.

Carreiro herself said the family would be going out to eat Chinese food at the Mandarin Restaurant which she said serves "all you can eat". Then she planned to take a shower and wind down.

"It still hasn't sunk in," said Carreiro's daughter Manuela, her eyes welling with tears. "My dad works so hard, and we've been struggling so much ... $40 million is so much money."