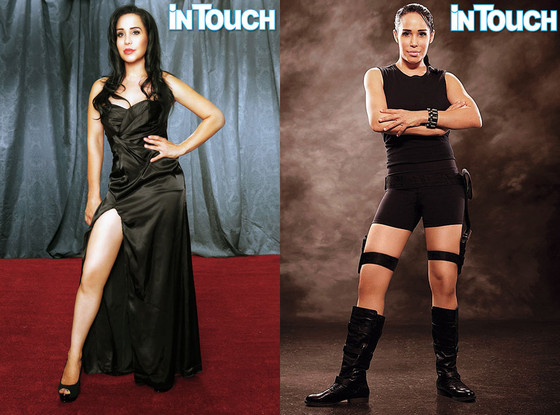 Readers of In Touch were shocked and confused upon seeing Nadya Suleman, or 'Octomom', imitating Angelina Jolie's styles and poses in recent In Touch magazine photos. The photos led some to believe that Suleman had developed a sick fascination with Jolie and was now coming out with it.

Octomom had not intended on this kind of reaction, and responded to the accusations by saying,

"I admire her, she saves children’s lives. I get that we both have a lot of kids but I don’t think I look anything like her.” She had no further explanation for the Angelina themed photo shoot.

Suleman also tells In Touch that Jolie has it easy compared to her.

"I do a lot! I’m a cook, a chauffeur and a nanny,” she told In Touch, adding that she doesn't have the perks of other celebrity mothers.

Suleman also has over twice as many children as the actress. She further contrasted herself with Jolie by pointing out that her life is quite different from Jolie's: Octomom tends to almost all the primary needs of her 14 children, and has no steady source of income.