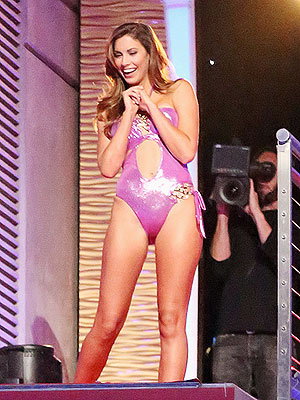 Katherine Webb, the former Alabama beauty queen, has quit the television show "Splash" under doctor's orders. Miss Alabama USA 2012 reported that after visiting her physician, she was advised to quit the competition in which celebrity contestants receive weekly coaching in order to dive into an Olympic sized swimming pool.

Webb's pull-out from "Splash" comes soon after the departure of two other contestants. Most recently, Chuy Bravo quit the competition after sustaining an injury. And former Playboy model Kendra Wilkinson decided to quit outright when her fear of heights got the best of her.

Although the contestants in "Splash" may look good parading around in skimpy swimsuits, the challenges they face when falling from the high dive into deep water are very real and some may say too dangerous. Webb announced she was leaving during an appearance on the latest episode, then later tweeted her thanks for receiving so much support from loyal fans who seemed to understand that she couldn't risk further injuring her health by continuing on the show. She was replaced as a contestant by comedian Louis Anderson, who decided to depart at the end of the episode, saying that he had little expectation of winning against challenger Brandi Chastain.