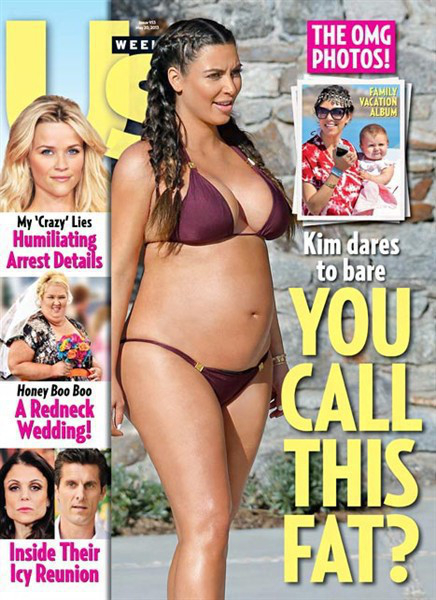 
Kim Kardashian was spotted in Greece sporting a bare bikini bump. She was featured on the cover of US Weekly. Her fans love this look.

Kim is noted for sporting unique fashion choices during her pregnancy. Her pregnancy has not been easy. No one would have guessed that by looking at the pictures. Kim is the center of criticism, and her weight gain has been extracted to the extreme.

One can not deny that she looks fabulous in this bikini. Kim admits that she struggles to find things that do not make her look heavy. Kim is putting too much pressure on herself. It is only natural to gain weight as the child within grows.

Other people as well have put a lot of focus on weight. Shouldn't the focus be that she is about to become a mother? Who cares if she gained some weight. She is a healthy pregnant person, and that is all that matters.

Kanye West, Kardashian's boyfriend, has yet to see Kim's pregnancy headlines. Although he attended one recent event with his girlfriend, he has been off in Paris making music. So what do people think of the US Weekly cover photo?

Megan Fox Using a Trampoline To Prep For TMNT