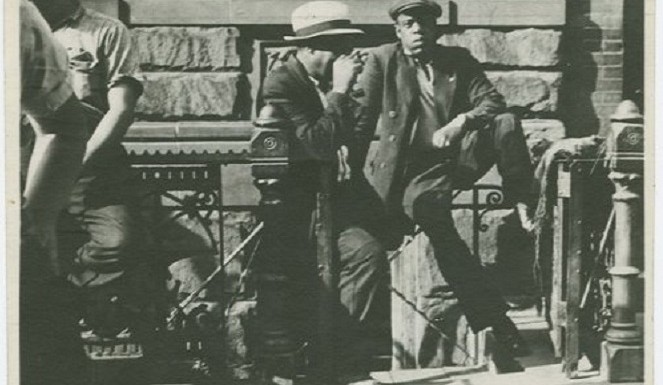 The Schomburg Center for Research in Black Culture sifted through old photographs at the New York Public Library and discovered a 1939 still of a man who bore a striking resemblance to rap mogul Jay-Z.

Fans of Jay-Z have come up with theories of their own with some speculating he is a time traveler and others wryly commenting that Jay-Z has somehow obtained eternal youth.

Another theory is that Jay-Z is a member of the Illuminati. The secret society reportedly rules the world from behind the scenes and some believe that Jay-Z has found his way into the ranks. Of course, that doesn’t really explain the 1939 photo of the Jay-Z look-alike.

While allegations of the photo being altered or even a complete fake continue, the NYPL fully stands behind its authenticity.

Yes, the New York Public Library swears, the old photo of the guy who looks scarily like Jay-Z really is an unretouched, un-Photoshopped image from 1939. "We're 100 percent certain it's legitimate," Adenike Olanrewaju, a library spokeswoman, said on Friday. (NY Times)

In a Tumblr post from last week, the New York Public Library provided some more context on the photo's background.

Was one of Brooklyn's finest in Harlem in 1939? This Sid Grossman photo of "Harlem Loiterers" from the Prints Collection at NYPL's Schomburg Center for Research In Black Culture has created quite a stir since being posted to the Center's Facebook page the other day. Why? Because the man on the right looks a heck of a lot like Jay-Z (for evidence, check out these photos of Jay-Z when he visited The New York Public Library in 2010). Cue Twilight Zone music, right? Schomburg's Curator of Digital Collections Sylviane A. Diouf found the photo while researching an exhibition, and said, "I was immediately struck by the similarity to Jay-Z and actually laughed out loud ... I still hope somebody will tell us who that young man really was." (NYPL Tumblr)

The resemblance between the two men is quite remarkable, but Jay-Z isn't the only celebrity who has an ancient doppelganger:

Rumors that Nicolas Cage might be far older than 49 years old, as he claims, started back in 2011 when an old photo of a Tennessee man from the Civil War era was posted for auction on eBay. When Cage was asked about the photo, he told David Letterman that he thought it looked like a "slowed down version" of himself, and went on to deny rumors that he's a vampire.
[/caption]